Jammu: A sub-inspector has been arrested in Jammu and Kashmir for his alleged involvement in a grenade attack on a police post, police said here today. 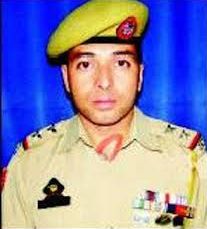 “Encounter specialist Sub-Inspector Shiv Kumar was arrested today from Thathri area (about 175 km northeast of Jammu) of Doda district following interrogation of five suspects in connection with a grenade attack on the police station there,” a police officer in Doda told.

Five people have been arrested for the attack, which was carried out May 21.

“We have arrested Kumar and are interrogating him to establish the facts,” the police officer said.

However, some officers expressed shock at Kumar’s arrest and said that “he is known as an encounter specialist in the area and his name spells terror for militants”.

Kumar was recruited as a Special Police Officer (SPO) — temporary recruits who assist police in anti-militancy operations — about 20 years ago.

He was instrumental in liquidating a number of militants and was appointed a constable in Jammu and Kashmir Police. He was promoted to sub-inspector for his anti-militancy work.

He has killed over 100 militants in the area during his 20-year stint with Jammu and Kashmir Police.