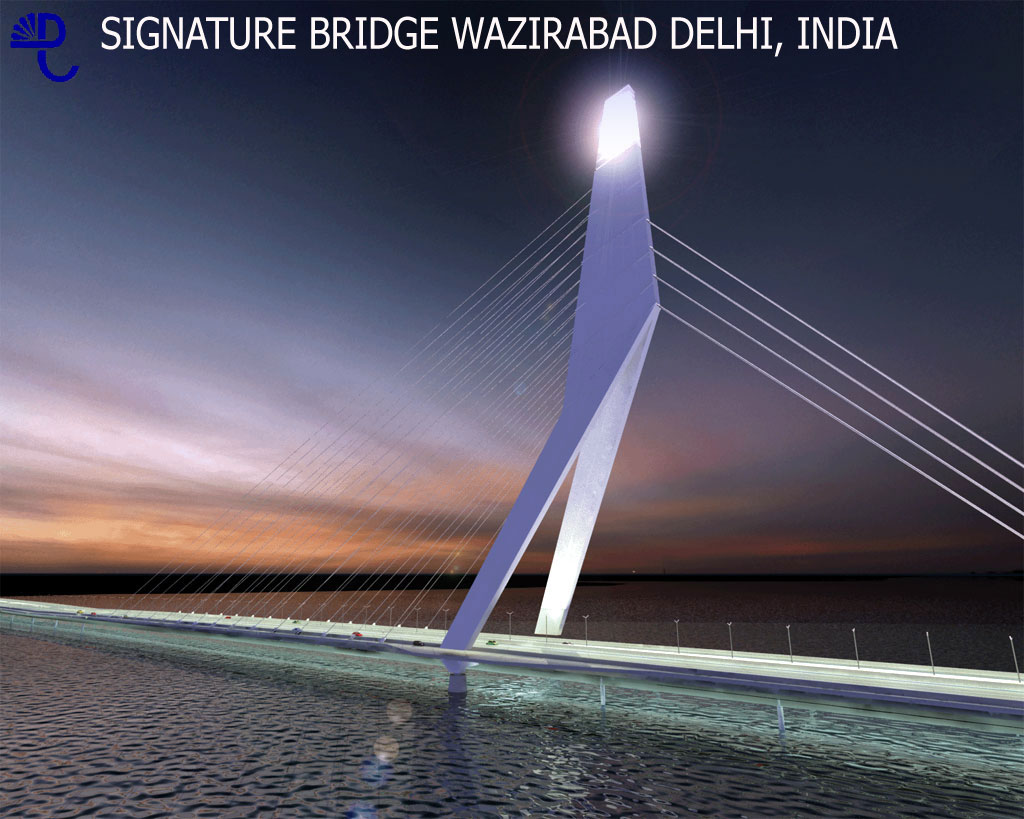 New Delhi, May 23 (IANS) The capital, which has so far basked in the glory of historic monuments and edifices built by the Mughals and Edward Lutyens, will boast of an iconic structure of its own in the form of the Signature Bridge – a cable-supported steel bridge spanning the Yamuna river – which is set to be ready by September 2014.

And an added attraction will be a recreation park, complete with water sports, boating, walkways and restaurants, developed on a one-kilometre stretch adjoining the bridge in east Delhi’s Wazirabad area.

Coming up 600 metres downstream from the Wazirabad barrage, the Signature Bridge will be 150 metres-tall – double the height of the Qutub Minar. When ready, it will connect Khajuri Khas intersection on the east bank of the Yamuna to the outer Ring Road on the west bank.

“It will be a bow-shaped, cable-stayed structure which is entirely made of steel. Around 80 percent of the work has been completed as the foundation work is over. Pillars have to be erected,” a chief engineer of the Delhi government told IANS.

“This will be a landmark structure in the capital. The bridge will be thrown open to the public by September 2014,” a Delhi government official said.

“The structure will have an asymmetrical central pylon which will support the deck with cables,” said the chief engineer, who preferred not to be identified.

The ambitious bridge project was announced in 2004 to decongest traffic.

Asked why it was taking so long to complete the project, a Delhi government official said: “In 2002, many saplings were planted in the area. Constructing the bridge required destroying all the plants. We had to take clearance; only then work could be started.”

An added attraction will be a viewing gallery right at the top of the central pylon to give tourists a bird’s eye view of the area.

“Four high-speed lifts will be installed to take people to the top of the structure. These will be passenger-cum-service lifts,” an official of the Delhi Tourism and Transportation Development Corporation (DTTDC), which has been entrusted with the task of completing the bridge, told IANS.

A recreation park is also being planned around the bridge where Delhiites could go for some boating, water sports, ambling along the tree-lined pathways or just eat at the many restaurants in the area, said an official.

“There is scope for promoting water sports in the area. Besides boating, restaurants and parks are likely to be developed there,” an official said.

“A pool will be created by erecting a rubber dam across the river so that water sports facilities can be developed,” said the Delhi government official.

“This will be a one-of-its-kind tourist attraction in the capital and will generate employment,” he added.

(Gaurav Sharma can be contacted at [email protected])