Jaipur: In a major goof-up, a man in Rajasthan received an admission card for an examination for the post of junior engineer that carried a picture of US President Barack Obama. 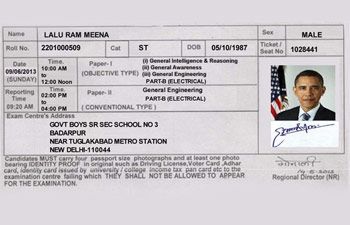 Lalluram Meena, 25, a resident of Rambas village in Dausa, was shocked to receive a strange admission card from the staff selection commission (SSC) that recruits people for junior posts for various ministries and departments of the government of India.

Lalluram told mediapersons: “I received by post an admission card from the SSC duly signed by the competent authority a couple of days ago. In the card, my name and address were correct, but the photo was of US President Barack Obama.”

Lalluram said what was stranger was the fact that he had never applied for the post of junior engineer for which the admission card had been sent to him.

“I am an Arts graduate. Only those who have completed graduation with science are eligible to appear in the examinations. I don’t know how this goof-up took place,” he said.

Lalluram said that he got scared when he received this card, but realised it was a mistake.