New Delhi: Heavy rains hit life in north India, and wrought havoc in Uttarakhand where 11 people died, nearly 50 were missing and thousands stranded in landslides set off by the incessant downpour, officials said today. With more rains expected, the situation is likely to worsen. 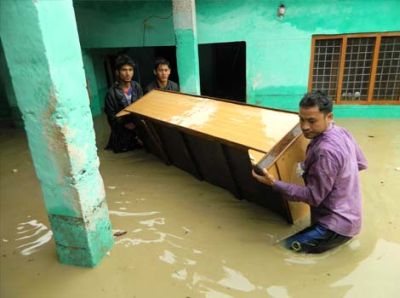 The situation in Uttarakhand led to suspension of the annual Kailash Mansarovar yatra owing to the relentless rains and consequent landslides.

Rescue operations are being carried out in the hill state by the army, para-military Indo-Tibetan Border Police (ITBP) and disaster management authority.

According to M. Shashidhar Reddy, vice president of the National Disaster Management Authority (NDMA): “More than 50 people are missing, and 11 are confirmed dead. Thousands of pilgrims are stranded in Uttarakhand.”

He also said that National Disaster Response Force (NDRF) officials are finding it difficult to move heavy machinery to the rescue sites, but remain in constant touch with state officials in Uttarakhand.

The rains, which began Saturday night, have continued for the past two days. The Met department said the rains in the month of June have since broken an 88-year record. Between Saturday and Sunday, the state capital received 220 mm of rains and by evening, another 220 mm of rains.

The downpour has led to the Char Dham Yatra being halted and thousands of pilgrims stranded enroute to Badrinath, Gangotri, Kedarnath and Yamunotri.

The worst-hit areas include Rudraprayag and Uttarkashi, where Mandakini river is in spate. In Rambada, the river water entered the market area.

A house in Prem Nagar area of Uttarkashi collapsed while several cars parked near the banks of the overflowing rivers were washed away by the strong current.

With the met department having forecast more thunder showers, the already grave situation may worsen with more landslides as the hillsides have become weak following incessant rain, said the NDRF, which works under the NDMA.

“Both rain and landslides are problems. Hills have become weak… if there is more rain, there is risk of the hills collapsing,” a NDRF spokesperson said.

In Himachal, five members of a family, including three children, were buried alive early today when boulders fell on their house at Chagaon village near Tapri, some 220 km from Shimla, Superintendent of Police G. Shiva Kumar told over phone.

He said the family was sleeping when the incident occurred. The entire Kinnaur district has been experiencing heavy rain for the past two days.

Even Pooh block in the district experienced over one feet of snow, which locals said was untimely.

Shiva Kumar said five other people died in various landslide and rain-related incidents in the district since Sunday.

Monsoon arrived in Delhi Sunday, a good fortnight ahead of schedule while Punjab, Haryana, Jammu and Kashmir have also been receiving showers.

In Haryana, rescue teams today evacuated 52 villagers, including 15 children, from a riverine island as the waters of the Yamuna river swelled Sunday in Yamunanagar district while rescue operations were on in Karnal district where nearly 200 people were stranded in Shergarh Tapu and Chandrao villages, 130 km from Chandigarh.

The Yamuna river, which enters Haryana from Uttarakhand at Hathnikund barrage in Yamunanagar district, had swelled since early Saturday after over 800,000 cusecs of water was released today morning through the Hathnikund barrage.

The monsoon this year had set over Kerala on schedule June 1 and advanced fast, covering the southern, eastern and central states within two weeks.