Amritsar: Punjab Deputy Chief Minister Sukhbir Singh Badal today was left “aghast” after he found out that the municipal corporation and improvement trust of Amritsar had laid down parallel sewerage line in the city, wasting crores of rupees of public money. 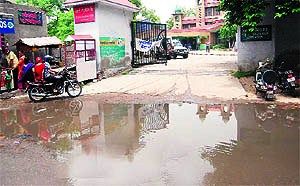 “He was aghast to learn that without realizing that under a Japanese project a sewerage line has been laid, the Improvement Trust and Municipal Corporation, on their own, laid parallel sewerage lines, wasting crores of rupees,” a Punjab government spokesman said.

“He said that we are accountable for every single penny being spent from tax-payers money and we have to make officers accountable for such lax approach,” the spokesman said.

He said that to prevent such duplication of work and wastage of money, all projects will be cleared by a nodal agency being set up for the city.

Badal was here to hold meeting with senior officers and approve the master plan for the Sikh holy city, 250 km from Chandigarh. He visited most of the sites of the ongoing development works in the city.

One of the sewerage projects, worth Rs.430 crore, was launched here in July 2011 with the collaboration of the Japan International Cooperation Agency (JICA) and the Amritsar Municipal Corporation. JICA provided Rs.348 crore aid for the project.

Badal directed officers of various departments to ensure timely execution of all the ongoing projects. He said the plaza being planned around the Golden Temple complex should be completed by Diwali this year.

He said that the government was committed to give facelift to Amritsar and adjoining areas with the completion of all development projects to be executed at the cost of Rs.1,668 crore in next two years.