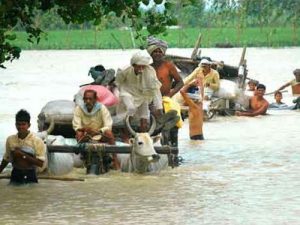 Additional Chief Secretary and Financial Commissioner, Revenue, Krishna Mohan said that the residents of Mewlipur and Indiranagar villages were shifted as the water entered these areas. The families have been shifted to another village.

Authorities in Haryana were fully geared to meet any eventuality, he said, adding the situation in Yamunanagar district has become almost normal as flood water of the Yamuna has receded. The district earlier this week saw flooding of a few areas.

Officials said that residents of some villages in Karnal district, who were stranded as river water had entered their villages, have now been moved to safer locations.

Chief Minister Bhupinder Singh Hooda has ordered special survey to assess loss to crops and agricultural fields due to the floods.