The ramification of the European Union (EU) formation in 1950 in hope to achieve peace and prosperity may be seen as a blunder in 2013, as the entire group of nations faces a severe economic crisis.

The economic and monetary union that accompanied the EU was seen as a technique to unify and erect a tariff wall against the United states as an economically defensive measure. 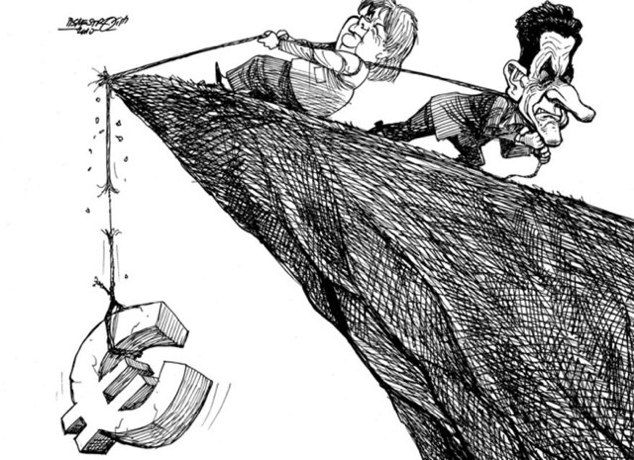 In addition, the formation of EU acted as an incentive to create a larger centralized world marketplace which could help in stimulating the world economy.

This union proved to be a success till 2007, when Europe accounted for 25.8% share of the world’s Gross Domestic Product (GDP), making it the largest contributor to the revival of world economy.

However, even the great “fortress Europe” could not withstand the impact of the 2008 economic crisis and recession in 2008 that caused havoc in all the states of the union.

One way to look at why a breakdown of such magnitude occurred in the EU is the use of a common currency, “Euro”.

The creation of a structure for a single currency was issued by the European Central Bank to bring about price stability and growth along with trading benefits in the international markets. However, the same Euro today is the cause of more problems than benefits.

Eurozone members, led by Germany, are being forced to bail out the weaker economies like Greece and Cyprus from financial crisis which is threatening the entire existence of the economic grouping.

Monetary union means a loss of national sovereignty. The transfer of money and fiscal competencies from national to community level is costing economically strong and stable countries like Germany to co-operate in the field of economic policy with other weaker countries. If this pattern continues, it could result in Germany exiting the Euro Treaty.

On the other hand, United Kingdom has been able to survive the rough impacts of recession relatively better than the other countries in the Eurozone through currency flexibility.

A sharp devaluation of sterling in 2008 acted as an important tool in re-balancing its economy. In hindsight Britain’s decision of not joining the EU has saved it from the ravages of a severe economic crisis.

Europe, unlike the United States is not a federation. Though they share the Euro and a common monetary policy, the Maastricht Treaty requires each member state to retain its own tax policies, budgets and banks and issue their own bonds. This can be seen as an additional cause for the current crisis.

It is therefore, essential that along with economic union the EU has a strong political institution to supervise and stabilize the single financial market, guide fiscal policies, coordinate economic policies, guarantee competitiveness and encourage sustainable growth.

However, the citizens of the member states are resistant to “an even closer union.”

In addition to the harsh austerity measures, increasing unemployment rates have created rifts between economic governance and democratic principles in many of the Eurozone countries, especially Greece. The unemployment rate in Europe now stands at 12.1%, the highest on record since 1995.

There were various factors that contributed to a further decline in the economy. One of them being the large and costly welfare system of France and its repercussions on economies of other member states.

The French model is financed by punitive taxes on employment and capital, and by heavy public borrowing. This resulted in a 90% increase in the public debt in 2012 from about 64% of GDP in 2007.

Due to excessive regulation, in the past decade, France’s share of exports have shrunk and the country is running a current-account deficit.

Investors have started questioning the entire EU as they fear that all members share similar financial features as Greece, especially high deficits and debts. This could lead to investors losing confidence in many of the troubled Eurozone countries.

A European state default can not only have an impact on its member states but also cause a rippling effect on the financial systems of other countries.

The sudden collapse of Lehman Brothers in 2008 revealed how interconnected the world’s financial system had become.

Give the prolonged crisis persisting in the European Union, it can be said that the Euro may have been a mistake but there’s no going back. Dissolving such a union would only result in chaos across the globe.

However, if the euro system is not demolished, it would soon result in economic failure, deeper divisions along with bitter resentments among European nations.