New Delhi: There should be no political interference in the decisions of a university, says Minister of State for Human Resource Development (HRD) Shashi Tharoor after several MPs sought Prime Minister Manmohan Singh’s intervention to stop the proposed four-year bachelors degree course in Delhi University. 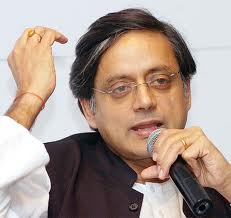 “Politicians and bureaucrats should not interfere in the decisions of a university. It should be decided by the academicians,” Tharoor told IANS on the sidelines of an online forum organised by Google Hangout yesterday.

The minister said any interference from the HRD ministry or government in the implementation of the planned four-year course in Delhi University would set a bad precedent.

The minister, who has been supporting the Delhi University decision to implement a four-year graduation course in place of the present three-year course, said the ministry was convinced that all due procedures were followed in taking the decision.

“They had given us a convincing argument that all process was followed by the academic council, which approved the course,” he said.

There are many unanswered questions around the decision, he admitted, adding that it would be best for academicians, not politicians, to sort them out.

“I asked them what happens to the students from other universities, who would come to Delhi University for masters after doing a three-year course. They said, while a graduate with three year course will have to do two years masters, the one with four year course can do it in one year.

“However, what if a student from Delhi University goes to any other Indian university? They did not have an answer, but it is for the academicians to sit and sort out such things,” he said.

Asked if the HRD ministry would want other universities to adopt similar pattern, the minister said the decision can only be taken by a particular university.

Speaking at the Google Hangout earlier in the evening, the minister said, at best, the University Grants Commission could step in.

The courses under the new Four Year Undergraduate Programme comprise Foundation Courses (11 in all), compulsory for all students to be taught in the first four semesters in order to strengthen their educational base; Discipline Courses I (20 in number) which are subject specific courses promoting in-depth knowledge; Discipline Courses II (6 in number) meant for students who wish to gain ‘minor’ knowledge of a subject other than Discipline I. There are also Application Courses, which are skill based – Integrating Mind, Body and Heart and Cultural Activities leading to value-based education, and NSS/NCC/Sports, which encourages physical fitness as well as engagement with the community.

This will, it is claimed, put the programme at par with bachelor-level courses offered in several international universities.

However, several objections have been raised to the decision, with the loudest protest coming from prominent Delhi University teachers who said the decision was arbitrary and taken in a hurry, without preparation.

A public interest litigation (PIL) challenging the proposed programme has also been filed in the Delhi High Court.