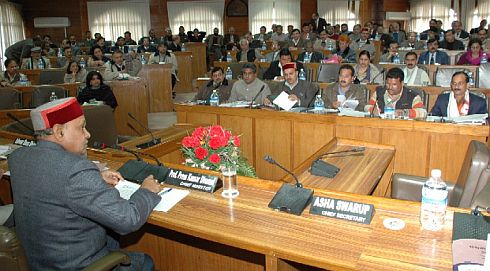 Shimla: On the second day of two-day-long high level meeting convened to finalise the draft annual plan for the next financial year to be proposed to the Planning Commission of India for its approval, Prof. Prem Kumar Dhumal while addressing the MLAs representing Kangra, Kullu, Una, Hamirpur, Kinnaur, Lahaul and Spiti districts to discuss their developmental priorities for respective constituencies revealed to enhance the NABARD-RIDF schemes by 35 percent from Rs. 300 crore for the year 2007-08 to Rs. 406 crore for current financial year.

The NABARD-RIDF financing schemes limit had been enhanced to give renewed momentum to various developmental activities uniformally all-over the State. He said that by giving priority to developmental schemes the funding limit had also been enhanced by about 35 percent. He said that the State Government had successfully got approved schemes valued at Rs. 374.76 crore till 31st of December, 2008 and the remaining amount of about Rs. 31 crore would also be realised during remaining period of current financial year, he said.

He said that top priority would be given to preparation of detailed project reports (DPRs) so that the same could be posed for funding to NABARD and major developmental policy of the State Government was to increase employment opportunities for educated youth.