New Delhi: Vina Mazumdar, chronicler of the Indian women’s movement and pioneer of women’s studies, passed away today after a brief illness. She was 86. 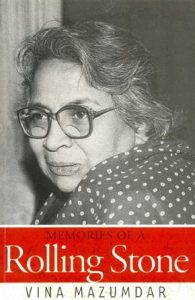 A social scientist of repute, Vina-di, as she is fondly known, was one of the key writers of the 1974 landmark report of the Committee on the Status of Women in India – Towards Equality.

A strong votary of women’s rights and their representation in legislature, Mazumdar was the founding director of the Centre for Women’s Development Studies (CWDS), an autonomous organisation under the Indian Council of Social Science Research (ICSSR), where she remained a National Research Professor till the end.

In her autobiography, “Memories of a Rolling Stone”, published in 2010, in which she spoke of her liberal upbringing, Kolkata of the 1940s, activism and policy making of the ’60s and the ’70s, is a significant contribution to the rich portfolio of women’s writing in India.

She is survived by three daughters and a son.