Islamabad: Pakistanis braved Taliban threats to turn up at polling stations today to decide the fate of 23,000 candidates, marking a democratic transition from one elected civilian government to another. 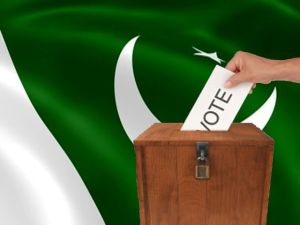 The violent run-up to the elections left at least 100 people, including three candidates, dead in a series of terror attacks and also saw the abduction of former prime minister Yousuf Raza Gilani’s son from a street corner meeting in Multan. The Taliban vowed more attacks Saturday.

Eager Pakistanis waited patiently in queues outside polling stations to cast their ballot for a new civilian government. This is the first time ever that an elected government has completed its term.

At a polling station here, over 200 people waited to vote.

“We want change, we are really fed up with old faces coming back to power every time and doing nothing for the nation,” BBC quoted Abdul Sattar, 74, as saying.

In Lahore, voting was going on without any interruptions. Long queues of women waited to vote in Peshawar.

As many as 75,000 soldiers stood guard across the country as polling began Saturday.

Security cameras had been installed where necessary, a military official told Dawn.

Armoured personnel carriers will be used in most sensitive areas and aerial surveillance of these areas will also be conducted.

Army is not taking any chances and sniffer dogs too will be pressed into service.

The official said 5,000 troops had been deployed in polling stations identified as most sensitive.

Election for 342 seats of the National Assembly and 728 seats in the four provincial assemblies will be held simultaneously. Polling began at 8 a.m., and will continue until 5 p.m. without any break.

The Election Commission’s data shows that a total of 23,079 candidates are in the fray for the National Assembly and provincial assembly seats. The country of 180 million will 84 million voters, including 36 million women, exercising their franchise.

Teen activist Malala Yousufzai, who was shot in the head by the Taliban, said Saturday that one vote can change Pakistan’s future and “it’s our right”.

In a letter, Malala said: “If we want education, electricity and natural gas in our country, we must take a step. Let’s vote for our country. We never realized how much powerful our vote is. One vote can change our future.”

She stressed that “it’s our vote that chooses which politicians will govern our motherland. I request all my sisters and mothers to move forward, go to polling station and vote. It’s our right”.

“And one day, a change will come. All girls and boys will be going to schools

and there will be peace everywhere.”

On the eve of elections, Pakistan expelled the Islamabad bureau chief for The New York Times.

The Times has strongly protested the orders of Pakistan’s interior ministry and is seeking his reinstatement of Declan Walsh, 39, a veteran correspondent who has lived and worked in Pakistan for nine years, most of it for The Guardian newspaper of Britain, the newspaper said Friday.

The 20-day election campaign had ended at midnight Thursday with mainstream parties holding big public meetings in the capital Islamabad and the eastern city of Lahore.