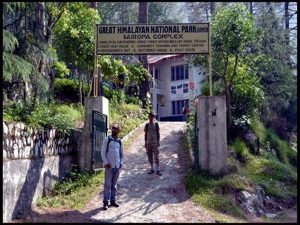 The International Union for Conservation of Nature (IUCN) has favoured including the GHNP in Unesco’s final listing, park director Ajay Srivastav said.

“On the recommendation of IUCN, a formal decision is now expected when Unesco’s World Heritage Committee meets in Cambodia from June 16 to 27,” Srivastav told.

Srivastav said it was the first visit by any IUCN expert to the GHNP, located in Kullu district and some 250 km from state capital Shimla, since it was shortlisted for World Heritage status in 2009.

A team of state wildlife officials has been invited for the 37th session of the World Heritage Committee in Cambodia to represent the GHNP.

India currently has six natural sites in the Unesco World Heritage list, including the Sundarbans in West Bengal.

With magnificent glaciers, lofty mountains and gurgling streams, the GHNP, notified in 1999, was orignally spread over an area of 754 sq km.

A number of protected areas, including the wildlife sanctuaries of Sainj (90 sq km) and Tirthan (65 sq km), were added to the GHNP in 2010. Thus, the total area known as Great Himalayan National Park Conservation Area is 1,171 sq km.

Srivastav said the GHNP is one of the two national parks in the world with the brilliantly plumaged western tragopan. The Machiara National Park in Pakistan also supports this species.

Another endangered pheasant, the cheer, is also found in the GHNP’s grassy slopes. Other pheasant species, the monal and the koklas, are in abundance in the temperate zone, while the kaleej occurs in small numbers below 2,000 m.

The GHNP harbours the most important gene pool of Western Himalayan flora and fauna, Unesco said on its official website.

“I count 70 blue sheep… the largest group of mammals I have seen in my years of trekking in the park… It is a good sign that the park is providing a safe habitat for a species that once was hunted for its meat and fur coat,” US expert Payson R. Stevens and the state’s chief conservator of forests Sanjeeva Pandey wrote in a recent issue of Sanctuary Asia journal.

“We are hopeful that the five-year process being initiated for GHNP will get Unesco’s natural status,” Chief Wildlife Warden A.K. Gulati said.(Vishal Gulati can be contacted at [email protected])