The enchanting and attracting beauties of Shimla, which the residents are much proud of, is all a valuable gift of Britishers who gave this city a new look. They not only made Shimla beautiful but also did develop it with all essential infrastructures like road and railway connectivity, a reliable and clean water supply, parks, clubs, theater and other needs for a healthy urban living.

A glimpse of Shimla that we get from the first pictures of the place was a shabby place, like any typical rural area of the times. The township was devoid of beauty and development. 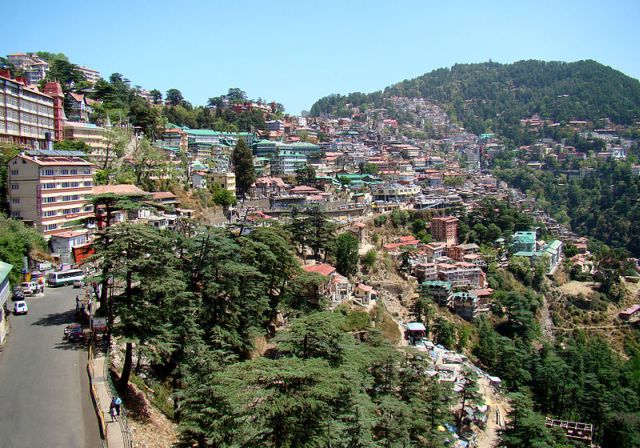 It was the British planners, during their rule, who made use of all its natural resources and converted that normal place into a city full of natural beauties, always having a sustainable development model in mind.

Most Indian carry an ill will about the colonial British rule but no one likes to appreciate their efforts that they did make to develop our country. They seem to be unaware about the developments around contributed by them.

Several places in the country where the British rulers visited or settled in are presently highly developed with all required facilities. In fact they taught people the way of living civilized life, as they constructed well managed buildings with proper sanitation system etc., reflecting their health consciousness nature.

In Shimla it were the British administration which got Deodar (Himalayan Cedar) and Cheel (pines) trees planted abundantly to turn around the place and make in naturally rich and beautiful. After them, no one has planted trees in such a large scale here.

In fact, dense forests, a part of British legacy are being destroyed due to landslides, heavy snowfall, illegal smuggling of trees and felling for making space for constructions.

Today tourists from different parts of India and abroad come to Shimla in order to see its natural beauty including snowfall, green dense forests, historical buildings and wish to come again by considering it as heaven on earth.

Most of the buildings of architectural values have been constructed by British engineers, be it buildings like Vice regal Lodge (now  the Indian Institute of Advanced Study), Kennedy House, Catholic and Protestant Churches, Gaiety Theatre, or  even Sanjauli College, their imprint is in all these buildings.

Why is it that people tend to forget that the Britons have done a lot for the city here. The need of the hour is to maintain this beauty with sustainable development.