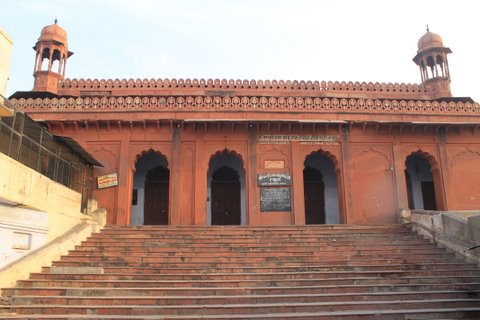 Agra May 15 (IANS) Conservationists here have demanded the restoration and reopening of Dara Shikoh’ library that is lying in shambles in the heart of the Taj city.

“People may have forgotten about its existence but during (Mughal emperor) Shah Jahan’s reign, it was a centre of scholarship and excellence,” said historian Raj Kishore Raje. “Sufi saints and scholars regularly met and discussed mysticism and theology with Dara Shikoh himself initiating the discussions,” he added.

Dara Shikoh (1615-1659) was Shah Jahan’s eldest son and would have succeeded him but for being defeated in battle and subsequently assassinated at the instance of his brother Aurangzeb. This was during an intense power struggle following Shah Jahan’s illness and culminated in his being deposed in 1658.

Mughal history and subsequent events would have been radically different had Dara Shikoh ascended the throne instead of the more fundamentalist Aurangzeb, say Mughal historians.

Dara Shikoh, whose name in Persian means “possessing such magnificence as Darius'”, set up libraries in several places, including one in Delhi. But the best known one was in Agra, also called his haveli. It was taken over by the British in 1881 to be converted into the Town Hall, according to the 1921 Agra Gazetteer.

Dara Shikoh was a great scholar of Persian and Sanskrit. Despite the ravages of wars and his involvement in a series of political and domestic crises due to Shah Jahan’s ill-health, he still found time to translate and write books. His chief mission was to explore the commonality between Hinduism and Islam and how the gap could be bridged.

Several important works including the Upanishads were translated into Persian. The library had separate enclosures for book binders, painters and translators. Dara brought thousands of books from Europe for this library.

The Braj Mandal Heritage Conservation Society has urged the Archaeological Survey of India (ASI) to acquire the building and take up restoration work before opening it to the public.

“This structure does not boast of power or royalty but symbolises the spirit of Sulah Kul, Din-e-Ilahi and the later day secularism. The library stands as a testimony to the high level of intellectualism and recognition of academic excellence. It should, therefore, be included in the tourist circuit for visitors,” the memorandum to the ASI said.

The red sand-stoned library building, which should have been conserved and protected by the ASI, is now in the possession of the Agra Municipal Corporation, which has sold parts of it to the traders of the Moti Ganj mandi, while other parts have been trespassed and encroached upon. This building was the first municipal headquarters and many freedom fighters addressed local crowds from its ramparts. It is one of the most important historical buildings in Agra.

In its heyday, it was a beautiful building, with airy shelves for the books, provision of light and air, huge halls and scholarly ambience. The central hall of the structure with highly decorative painted windows, stone carved shelfs for books with proper ventilation and air passages and natural light filters speak of the taste and passion of Dara Shikoh.

In course of time, the beautiful library lost its patrons. During the British period, it was briefly used for the high court and later for government offices and the local body in 1903.

An over 300-year-old map of the area lying at the Agra University’s K.M. Institute brings out the strategic location of this library. But the Archaeological Survey of India refuses to recognize it as a heritage piece worthy of conservation, historian Raje rued.

An ASI official said the property belonged to the Municipal Corporation of Agra, which “should be responsible for its restoration.”

But senior mediaperson Rajiv Saxena asked if the ASI “protects and maintains so many smaller and insignificant buildings, why can’t it add this beautiful and important structure to its list”?

“The need is to acquire this building and open it to the public so that the rich literary and academic legacy of the great Persian and Sanskrit scholar that Dara Shikoh was is known to our people,” Raje said.

“The least one can do is to highlight his contribution and let the younger generation know about the splendid work Dara Shikoh did. Indeed, the course of history could have been changed had Aurangzeb not cruelly got Dara Shikoh lynched in the bazars of Delhi, and had his head presented to Shah Jahan, who was confined in a dingy room of the Agra Fort, overlooking the Taj Mahal,” Raje added.