Dharamsala: God of cricket Sachin Tendulkar’s imminent knock in the land of gods has sent the excitement quotient soaring across the boundary.

His fans are desperately awaiting his first ever match at the Himachal Pradesh Cricket Association’s (HPCA) sole venue, located at an altitude of 4,000 feet above sea level here, May 18 when Mumbai Indians take on Kings XI Punjab. 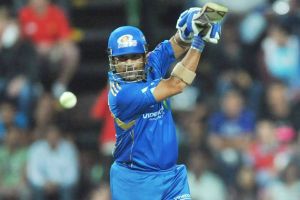 “Most of the tickets for the second IPL match here have been sold out well in advance. Only a handful of tickets, that too in the expensive blocks, are available,” HPCA press secretary Mohit Sood said.

He said it’s only the craze of the fans to witness Tendulkar’s batting in the newly-constructed international ground that has created the buzz.

“The demand for tickets for the second match is more compared to the first one (Delhi Daredevils versus Kings XI Punjab May 16),” he added.

Over 21,000 people are expected to witness the second and the last match of the IPL-6 season here.

“Of course, it’s a proud moment for the organisers too to see Tendulkar in action here for the first time,” HPCA president Anurag Thakur, a member of the Lok Sabha, told.

He said even Ricky Pointing, Mumbai Indians skipper, would also be seen in action (in Dharamsala) for the first time — though whether he starts the game remains to be seen.

“We are working to make it a memorable event,” added Thakur, the man behind the Rs.100-crore stadium and ultra-luxury residential complex.

This picturesque Himalayan hill station, which has lured hundreds of thousands of Westerners since Tibetan spiritual leader Dalai Lama settled here in 1960, witnessed its first international ODI between India and England Jan 27.

The stadium, 250 km from state capital Shimla, has a 21,600-seating capacity, besides a world-class indoor stadium comprising video analysis facilities for both bowlers and players, a club lounge, restaurant, bar and banquet hall.

“We have procured the tickets well in advance. Now we are preparing placards and banners to greet the god of cricket in the land of gods (Himachal Pradesh),” cricket buff Shruti Sharma and her friends said.

The popularity of the venue soared after seven IPL matches were held here in the past three seasons.

Match organisers said the players would stay in the Pavilion residential complex, overlooking the stadium. It has 32 huts made of imported wood and 38 concrete rooms.

However, the HPCA admits that the spectators might face problems in getting suitable accommodation.