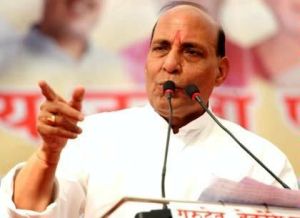 Addressing a press conference here, Rajnath Singh said there was no alternative to elections and the country needed a new government.

Terming the United Progressive Alliance (UPA) government the “most corrupt” since Independence “with scams of more than Rs.550 trillion”, he blamed the Congress-led government for near wash-out of the second half of budget session.

He said the UPA has developed a penchant for shielding people charged with corruption till the very end.

“There will be jail bharo agitation from May 27 to June 2,” he said.

The Bharatiya Janata Party (BJP) chief did not make a direct demand for prime minister’s resignation but said that if Manmohan Singh introspects, he will have no option but to resign.

“Two ministers resigned yesterday. The question is not of one or two ministers, whatever has been going on has put a question mark on the whole administrative process. The prime minister should introspect. If he does, there will be no option for him but to resign,” he said.

Attacked the prime minister over the coal block allocation controversy and the 2G spectrum allocations, Rajnath Singh referred to Kumar’s remarks Saturday and said the former minister should tell reason for his resignation.

“Whom he tried to save through his resignation,” he asked.

Targeting the Manmohan Singh government on corruption, he said the situation is going from bad to worse.

“There is coalgate, railgate, khelgate…” he said.

He said former communications minister A. Raja had not been summoned by the chairman of JPC on 2G spectrum despite repeated pleas.

Rajnath Singh also accused the UPA of failures in handling of internal and external security, economy and diplomacy.

He referred to Chinese incursion in Ladakh and said the country wants to know truth about reports that India had dismantled defence infrastructure as part of a deal.

He accused the UPA of failing to check price rise, fiscal deficit and current account deficit.

Answering a query on loss in Karnataka, he said the party was prepared to put power at stake but will not compromise on corruption.

“We have zero tolerance policy towards corruption,” he said.

Answering a query on Narendra Modi’s campaign in Karnataka, he said the Gujarat chief minister will play an effective role in the party.

“He is a popular chief minister. His performance is good… He will be in a active role,” he said.

On the issue of issue of Ram temple in Ayodhya, he said the matter was before the courts.

“We should wait for court verdict,” he said, adding he hoped there will be an early decision from the Supreme Court.