Shimla: In what could be a respite for all public transport users here, the Department of Transportation has called for a meeting with all private bus operators on 22 April to reschedule the timetable for all private buses plying in the district.

In Shimla, the privately operated buses are a lifeline of the city, but their unscheduled timetable (which remains unchanged for a decade) has become the biggest nuisance. 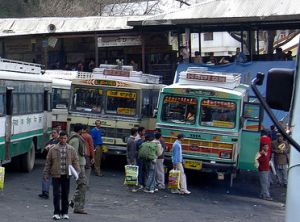 Initiating for the first time, with the motive to facilitate the public, Transport Department has summoned all private bus operators, along with their allotted timetable and route permits, for a meeting in the Deputy Commissioner’s office premises at 10 am on 22 April.

If all goes well, the meeting could mean an end to all brawls that private bus drivers and conductors indulge themselves in, on each route within the city and across the district, concerning nothing but time of running allotted to them.

In the meeting, the Department will also consider changing the timings of the government (Himachal Road Transport Corporation) busses.

Every year Transport Department allots permits to numerous private bus operators, but since the last ten years there has been no change in the timeslot that these buses have been running on in the district. Thus, this meeting is all the more significant.

More than 300 private and government buses have been allotted routes in the district. Out of these, 50 plus ply on long routes, while almost 200 odd ply within Shimla city. The scenario within the city is such that there are a few buses which are running in the same time slot (or at minimum time gap), a situation that results in over-speeding, accidents and frequent arguments and fights between these operators, blunt of which (delay and harassment) has to be borne by the public.

Everything is well prepared for the meeting, but considering the image these bus operators have created in our minds over the years, we are not ruling out a possibility of a fight or disrupted meeting.