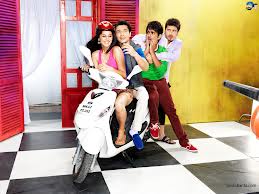 New Delhi: Indian cinema, in its 100 years’ legacy, witnessed for the first time, the digitally restored version of Sai Paranjpye’s 1981 “Chashme Buddoor”, and its new-age remake, David Dhawan’s “Chashme Baddoor” this week. The latter seems to be doing better business, but the former seems to be setting pace for more classics to be restored in the times to come.

For veteran actor Farooque, “it is a very interesting moment in the 100 years of Indian cinema”.

“Two movies with the same name, and with the same story releasing on the same date. I will definitely go to watch the remake,” Farooque sportingly told.

Both the films released Friday – the new film is produced by Viacom 18 Motion Pictures and the old classic has been digitally restored and brought back to theatres by PVR Director’s Rare.

The response to Dhawan’s “Chashme Baddoor” is better in terms of the moolah, said trade pundits, who indicated that the film minted roughly close to Rs.5 crore on its opening day.

“The new ‘Chashme Baddoor’ made Rs.4.75 crore all over India, while the old one has hardly any shows in terms of volume. We still haven’t got any figures yet because they have selective shows,” Rajesh Thadani, a Mumbai-based distributor of Multimedia Combines, told IANS.

Balkishan Shroff of Shringar Films, told IANS: “The remake film has opened really well and I see a very bright future for this film. On Friday, the film had around 60 to 70 percent occupancy.”

He ruled out any comparison between the two.

“Both the films can’t be compared. The remake film is youthful, it is today’s film. Time has changed and even the audience’s taste has changed.”

Nevertheless, the older generation, would perhaps love to relive memories by going to the theatre to watch the old “Chashme Buddoor”.

“The new one has potential to grow because its a comedy film and the reports are very decent. The older generation will obviously prefer the earlier ‘Chashme Buddoor’. They are definitely going for that, but the figures won’t be anything major,” Thadani said.

Jaspal Dhingra, a distributor from east Punjab, said the youth has highly appreciated the remake.

“Because of the excellent marketing by the Viacom team, the movie had a good opening. The digitally-restored version of the movie hardly had any publicity, and it will go unnoticed,” added Dhingra of Nanaksar Enterprises.

However, officials at PVR Director’s Rare believe that even though it is a clash of the two, the release couldn’t have been better timed.

“‘Chashme Buddoor’ was in the pipeline for the release. Since the remake was also being released, there could not have been a better time to release the restored version because the buzz will be maximum, and both the movies will benefit from it,” Shiladitya Bora, head, PVR Directors’s Rare, told IANS.

Giving out the figures garnered by Sai Paranjpye’s movie, he said that on Friday, the film had the maximum occupancy of 28.22 per cent in PVR Forum Mall in Bengaluru. At their theatres in Saket and Gurgaon in Delhi-NCR, they have an occupancy of 22 and 20 percent, respectively. In the rest of the places, the film enjoyed an occupancy of around 14 to 18 percent approximately.

Bora believes the numbers will pick up towards the weekend with more people getting to know about the release of the old “Chashme Buddoor”.

He said it is not fair to compare both the releases as the remake is a mainstream wide release, and the restored version is a limited release, with just 33 screens in India and 62 screens worldwide.

However, he is hopeful for it.

“Since it’s a re-release, the movie is expected to stay in the theatres for at least two to three weeks,” he added.