If Narendra Damodardas Modi reads the forthcoming book by journalist Kingshuk Nag he would be angry. Interestingly enough, Rahul Gandhi’s reaction won’t be very different either! Instead, the book is for audiences seeking a short and balanced account on one of India’s most enigmatic leaders. 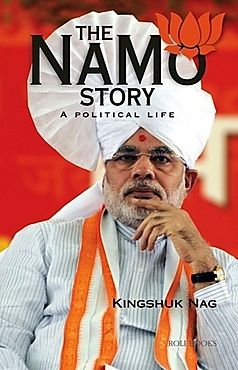 That’s because the narrative is built on two planes. There are, for example, detailed accounts of the author’s ringside view of the Gujarat riots of 2002, which Nag reported as the resident editor of The Times of India in Ahmedabad – how Atal Bihari Vajpayee was bullied into retaining Modi, not to mention the Gujarat chief minister’s stunts like claiming a massive gas find by the Gujarat State Petroleum Corp that never was.

These and many other ghosts are what Modi and his followers would best like to forget. Why, for example, have readers reminded that Modi allowed Tata minder Niira Radia to broker the Nano deal. Or how he got his hair styled to imitate yesteryears superstar Rajesh Khanna!

True to form, the author rewinds us into crisp summaries of these events, peppering it with political analysis – and journalistic trivia – that got him the Prem Bhatia Memorial Award.

Nag also places on the record pressure on his newspaper to remove him. Not surprisingly, he states his gratitude to his management; and then presses the pedal with quotes from bureaucrats, police officers, social activists and academics that bring out the complex role the chief minister played.

It’s a trademark style of using another person’s quote – some of them ordinary citizens without any obvious claim to feature in a serious book – without having to say all the unpalatable parts directly.

That said, it would be foolish for Modi trolls (read Rahul Gandhi’s boys) to rejoice Nag’s book. The author weaves an engaging account of the protagonist’s hard work and focus – attributes that may have brought him within kissing distance of Delhi.

It indeed is a miracle of Indian democracy that a humble tea vendor’s son, one who mopped floors in Rashtriya Swayam Sevak Sangh quarters, is today the toast of India’s biggest business tycoons, not to mention governments in London and Washington who missed the wave initially. The chapter on Modi’s consequent love affair with Beijing and Tokyo is useful here.

The author also uses his insight into business chamber politics to trace how Modi gravitated towards FICCI and never quite made up with CII, despite then director general Tarus Das’s famous attempt to atone.

In today’s context, when Modi is being touted as a prime ministerial candidate, a balanced account on him was overdue. This is a cryptic one, but welcome because the discourse so far has been overwhelmed by extremes, hagiographies or anti-Modi pamplets.

Rather than fall in this trap, Nag aims his book at those who are curious, but not quite consumed by admiration or abject hate. The pursuit of “balance” on a personality like Modi isn’t exactly a marketing bullseye. It may not get Nag into TV studios where debaters take extreme positions, a mere minute after cosy conversations in the green room.

Similarly, it is hard to see the twitteratti lionizing this book. Those using the hashtag #Fenku, a disparaging reference to hyperbole within Modi’s speeches won’t like the positive bits. Conversely, those mocking Rahul Gandhi using hashtag #Pappu will find hard to explain how Modi, their own god, has failed.