Amid tight security EC members Bambar Thakur, Chander Shekhar and Harish Janartha were headed for the meeting scheduled at the VC office, when SCA and ABVP students confronted them, demanding a resolution to the demand for a roll back of increased B.ED prospectus prices.

Students started sloganeering against the VC and ruling congress party, when the large crowd gathered around were seen jostling and pushing the policemen around. A minor clash was witnessed before the large police presence managed to bring the tense situation under control.

On being confronted Bambar Thakur let the agitating students know that all steps would be taken to resolve the issue amicably.

Speaking for the students community Rahul Chauhan SCA president said “it appeared that the vice-chancellor was acting on behalf of the government whereas his first priority should be the welfare of students community, no matter who is governing the state.  The issue is clearly student oriented and not a single rupee increase in the prospectus would be tolerated.”

Students Federation of India (SFI) has taken the week long agitation beyond the campus and two days ago did hold before the Main Post Office on The Mall asking the postal authorities to desist from selling the B.Ed. prospectus in the Post Offices. 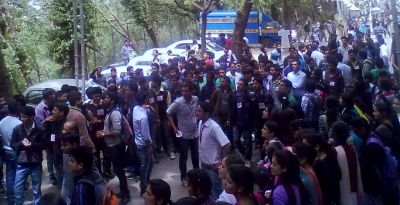 The university after a gap of many years has decided to hold entrance examinations for B.Ed. courses but the fund starved university has doubled the price of prospectus being sold for the competition, something the students have been agitating for over week.

With the competitive exam scheduled to be held a month later but unable to sell the prospectus in time, a question mark has been raised whether the authorities would be able to hold the exam at all.