Shimla: Lacking competent officers, the Himachal government is increasingly relying on retired officers for getting the machinery moving as yet another retired bureaucrat has been appointed as officer on special duty (OSD).

Former bureaucrat Abhay Pant is the latest to join the growing list of OSD’s the Congress government headed by Virbhadra Singh has appointed after duly obtaining the cabinets approval. 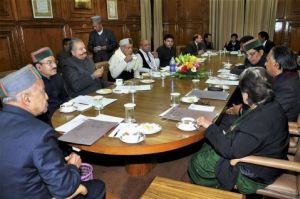 Though the government is yet to make an official announcement about the latest appointment, however, highly placed officers let Hill Post know that Pant has been assigned the task of preparing, approving and finalizing the draft recommendations to be presented before the 14th Finance Commission in order to obtain relief for the mounting non-plan expenditure of the state.

This is the first time in the state’s history that such a sensitive position, otherwise the job of the finance department, is to be manned by a retired bureaucrat.

Headed by former Reserve Bank of India Governor, YB Reddy, the 14th Finance Commission is to take stock of committed liabilities of state governments before recommending due allocations for the 2015-20 period.

Commenting on the development, a senior government official said, “Himachal is in for a tough time ahead for as much as 82 percent of the state budget makes up for non-plan expenditure but by repeatedly presenting revenue surplus budgets for the last three years, the 14th Finance Commission would not be able to give much relief under established norms.”

Besides the latest appointment, the chief minister has a battery of five more OSDs, three of whom are based in Shimla and two are permanently stationed in Delhi. Of the three OSDs appointed in Shimla, TG Negi and TC Janarta, are retired bureaucrats. The third OSD Amit Pal Singh had also served in the same position when Virbhadra Singh was in union cabinet.

Other than OSDs, the chief minister has also appointed Subhash Ahluwalia, a former bureaucrat, as his personal secretary, who is also handling the job of private secretary, a position otherwise handled by a regular IAS cadre appointment.

Both Ahluwalia and Janarta have served as private secretaries in earlier terms of Virbhadra as chief minister.

Senior bureaucrats on conditions of anonymity confided that the ad hoc arrangement was resulting into a gap for obtaining the political input into decision making processes as official files for the chief minister could not be routed through anybody other than a regular IAS cadre officer.

“With the chief ministers’ front office being handled by a retired bureaucrat, the load of obtaining clearances from the chief minister office has fallen on the principal secretary’s to CM’s office,” another bureaucrat disclosed. “It also reflects our incompetence,” he confessed.

Interestingly, the growing dependence of the chief minister office on ODS’s has had a fallout. In the last cabinet meeting all ministers were also permitted to take on board one OSD each.