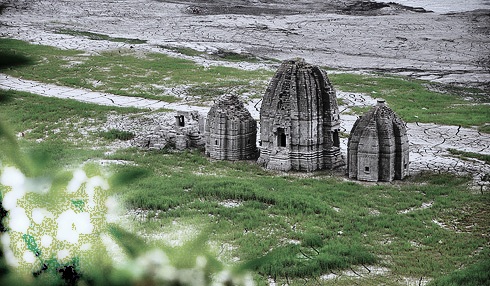 The rich and rare heritage that are lying in submerged areas of Gobind Sagar Reservoir in Bilaspur since 1964 are about to become extinct as no maintenance has been taken place since its origin .

The temples were submerged in the reservoir built over Sutlej River 53 year ago after the nation built its first hydropower project at Bhakra by displacing a population of nearly 40000people from 234 revenue village.

Although in 2005, the efforts has been made by former minister Ram Lal Thakur that ASI had assured to restructure the temple with new place as a Heritage Park but nothing is done so far.

Even ASI has demanded for 20bighas to relocate about 20ruined temple structure from the state government. In 2006, the priority was given to temple so 12th finance commission had funded 10lakh for the maintenance of the temple as a token.

The state government claimed that we have given the responsibility to the department of language and culture but till date no maintenance evens the shifting of the temple taken place.

Moreover DK Gupta Director Language and Culture said, “department had selected a private patch of land near Kunala in Bandla hill”. Even the ASI team has preferred the land near water sports complex but also rejected by zoological wing, he added.

He said the matter is with ASI and district administration to provide land.

The temple remains under water for a major part of the year and rise above the surface level only when the water level drops. It is not worth to say that now major part of temple are covered with silt deposit but the department seems to be blind towards the maintenance of the temple .