Dehra Dun: It was once a crown in the jewel of Uttar Pradesh, as Uttarakhand has not been formed then. It was known as the Queen of Hills, where luxurious hotels with live bands entertained the lakhs of tourists that came every summer and autumn. Names like Talat Mahmood and Manna Dey regaled the tourists in the Summer Festivals. But is has been downslide ever since, for Mussoorie is not even a shade of its glorious past. 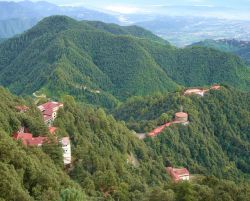 In a remote corner of the sprawling state of Uttar Pradesh, the authorities that were in the state capital, Lucknow, never looked towards it while the local officials closed their eyes towards the rampant encroachments, felling of the large oaks, rhododendrons and cedars that were once its hall mark. The big hotel names of yore, faded into oblivion, and though some of them are still there, they are not even a shadow of their glorious past.

Those who studied in the number of well-known schools that dot the hill station, on a recent visit to their alma maters, after two decades, were horrified at what the ‘Queen of Hill’s looked like. They did not mince words to say that the Queen now looked like an aged pauper, with neither the grace nor the charm, which had all but gone. It was surprising that the state and district authorities had been mute spectators to this “unwarranted rape”.

And though it still attracts tourists during the summers, when those who cannot make it to the better climes of say Shimla, Nainital, Manali or Darjeeling for that matter, they only come to go away disenchanted with the concrete structures sans any greenery, with nothing for them to hold on to. It is perhaps why tourists cut short their visit, after perhaps a day or two in the adjoining hills, where some greenery can still be seen, though it too is being denuded fast.

In fact, the recent meeting of District Magistrate, BVR Purushottam to take stock of the situation for preparing the hill station just before the summer season sets in, said it all. So peeved was he at the callous and care-a-less attitude of the local officers, which has now become a habit, that he minced no words and scolded them left and right for not taking the directions he had given at the last meeting earlier to ensure that the tourists are not put to unwanted circumstances.

“The town was clean and beautiful during my training at the Lal Bahadur Shastri National Academy of Administration (LBSNAA). But comparing it with those years, the situation has deteriorated drastically due to the callous approach of the officials here”, he is reported to have said while admonishing them for the delays in the works.

But perhaps just holding the present lot of officials posted at the hill station for its neglect, would be injustice to them, it would be more appropriate if those that were in Mussoorie over the last two decades, were taken to task for their various alleged acts of omission and commission and who all were helped directly and indirectly for the large number of encroachments and illegal constructions that have come up and sadly been legalized.