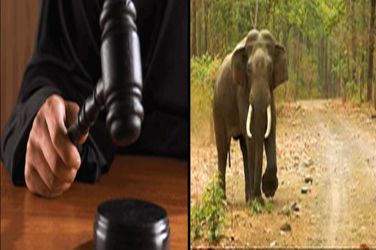 A double bench of the Supreme court, comprising Justice K S Radhakrishan and Justice Deepak Mishra, has after hearing a PIL filed by a Shakti Prasad Nayak has issued notices to the central government, union ministry of forest and environment, the Railways and 14 states having large elephant herds, where elephants are dying on being hit by trains and nothing is being done to contain the problem.

Meanwhile a bench of the Uttarakhand High Court, comprising Chief Justice Barin Ghosh and Justice Alok Singh has served a notice to the Uttarakhand government asking it to furnish the details of the arrangements that have been made for the protection of elephants and tigers in the Corbett National Park.

The notice has been issued in a PIL filed by the Himalayan Yuva Gramin Sansthan, an NGO, which has categorically stated that the illegal construction of hotel and resorts in the Reserve area, was not only threatening the movement of the pachyderms and felines, but was also a threat to their security.

It may be recalled that that the Dehra Dun-Haridwar railway line passing through the Rajaji Sanctuary has become a threat to the wild elephant population that is there. Conservative estimates put the number of pachyderms that have been killed by the trains running along the tracks over the past few years at over 20, but no efforts have been made so far to take stock of the situation.

Likewise the deaths of almost 50 leopards and tigers in the two months of this year has raised eyebrows over the rampant killing of the felines, not only by locals due to the man-animal conflict, but also poachers who have been active in this small hill state and have passed on the skins and other parts to smugglers who smuggle it to adjoining countries, where these are used in medicines.

Though concern has been shown by the state forest department over the large number of deaths of the felines, but precious little has been done at the ground level to take stock of the situation and undertake measures that could reduce the man-animal conflict and thereby the killing of leopards in particular, who are known to lift cattle and children in search of prey.