Dehra Dun : With the centre and state governments not being able to preserve the cleanliness and dumping of sewerage nullahs into the Ganga the Akhil Bharatiya Sant Samiti has undertaken upon itself to take up the gigantic task, with the cooperation of the people living in the townships that fall along the river, and perhaps the most responsible for dirtying it. 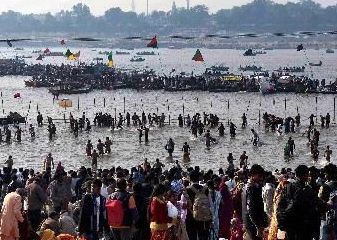 The national executive of the Samiti, which met in the holy city of Hardwar on Sunday, made it clear that it would be working on three main areas, which are cleanliness of the Ganga, Gau raksha and dharm raksha, of which preserving the cleanliness and sanctity of the Ganga is paramount and comes foremost.

The national president of the Samiti, Mahant Avichal Dass said that seeing the condition of the Ganga as it is today, it had been decided to start a two phased programme for the cleanliness of the river starting from Oct 19. The programme will begin from the holy city of Hardwar and go downstream.

He said that the first phase of the programme will focus on cleaning the river from Hardwar to Varanasi, while the second phase will concentrate on the stretch from Varanasi to Ganga Sagar. Various prominent personalities from the sadhu samaj, also appealed to the saints and hermits of the country to join into the efforts to ensure the success of the programme.

Mahant Avichal Dass said that to make the central and state governments and the people aware of the deteriorating condition of the Ganga a rally of the sant samaj will be undertaken from the Kalka Madir, Delhi to Hardwar on April 1. “Thereafter a sant sammelan will also be organized on the banks of the river at Har-ki-Pauri, Hardwar”, he added.