Dehra Dun : With the state government not being able to ensure the safety of tourists in adventure sports in the state, adventure tourism which is being promoted in a big to lure visitors from both India and abroad to Uttarakhand, may not really be able to take off. 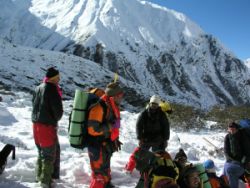 The death of 23-year-old Prashant Pandey a tourist from Delhi on March 17 and that of a foreign tourist two days earlier while rafting in the rapids of the Ganga near Rishikesh, has forced the authorities to stop rafting in the river till further notice.

According to reports, a seven-member group of tourists comprising five boys and two girls has come from Delhi to Rishikesh for the weekend and decided to go for rafting on one of the most popular stretches from Kodiyala to Muni-ki-Reti.

However, on this stretch the flow of the river becomes very rapid, which no doubt raises the body adrenalin and gives the necessary thrill, but is considered dangerous. Popularly known as the wall, the water goes into a whirlpool and comes back strongly from the opposite direction of the flow of the river because of which rafts are known to have turned over at the point.

This is exactly what happened with the group of seven tourists from Delhi on March 17 and though six of them were saved timely by the river police, the deceased was pulled out and water from his stomach drained. He was rushed to the hospital, where he was declared brought dead.

Meanwhile informed sources alleged that the government was not very strict in ensuring that the rafting companies use proper gear. They claimed that the life jackets and head gear were not of the desired quality, because of which those involved in accidents were either fatally injured, or drowned.

They went to the extent of saying that most of the companies did not have trained persons on the rafts and were mostly employing local youth who were not fully trained in rafting, specially the maneuvers to be undertaken while going through the rapid stretches and measures for getting the occupants out, should the rafts overturn.

Sources said that it was also necessary that a medical test be conducted on the tourists wanting to do rafting, as some of them were medically not fit to undertake the stress and strain of rafting in the rapids, specially in the absence of trained guides.

They claimed that because of the number of companies that had come up and were undertaking rafting o n the river, there was tough competition and to save costs, some of the companies were employing untrained local youth.