New Delhi: An all-party meet to discuss the controversial anti-rape bill failed to reach a consensus Monday following differences over lowering the age of consent to 16 years, and making stalking and voyeurism punishable under the law.

Political parties will meet again at 12.30 p.m. to evolve a consensus on the issue. 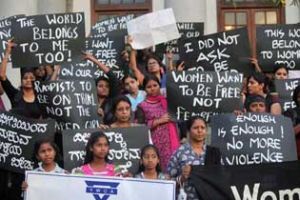 “We had an all-party meeting in the morning on the Criminal Law (Amendment) Bill, 2013. The ordinance was brought by the government and has to be replaced by a bill,” said Parliamentary Affairs Minister Kamal Nath.

“Largely there is consensus on contents of the bill, except that there are concerns about misuse and abuse of some of the provisions and parties have suggested there should be adequate measures for safeguard. And what those measures should be, we will discuss in the next few hours,” he said.

The minister said there were also differences over lowering age of consent to 16 years, from the present 18.

“There are also differences of opinion over the age of consent being (lowered to) 16 years. We will again be meeting at 12.30 p.m. and all issues will be discussed. And if required, the government will bring amendments along with the bill so that it can be put up for consideration and passing in the Lok Sabha and then Rajya Sabha,” he said.

The Bharatiya Janata Party (BJP) and the Samajwadi Party (SP) have expressed reservations on the clause for lowering the age for consensual sex to 16 years.

Last week, the government managed to resolve the differences over the bill within the cabinet with a group of ministers debating controversial clauses threadbare.

The ministers differed on the use of word “rape” in place of “sexual assault”, lowering of age of consent from 18 to 16 years and the definition of voyeurism and stalking, punishable under the bill.

The bill also proposes the death penalty in the rarest of rare cases for rape and for repeat offenders.

It also incorporated suggestions of the Justice J.S. Verma Committee, which was formed to offer suggestions on making anti-rape laws stronger.

The issue has been in sharp focus after the brutal assault and gang-rape of a 23-year-old woman in Delhi Dec 16 last year. She succumbed to her injuries Dec 29 in a Singapore hospital, where she had been airlifted for treatment.

It has to be passed by April 4, within six weeks from Feb 21, when parliament’s budget session started.