Sanju Samson, Sachin Baby, Rahul Shukla and Harmeet Singh have been signed by the 2008 champions and will join the team’s training camp soon to prepare for the sixth edition of the Twenty20 league. 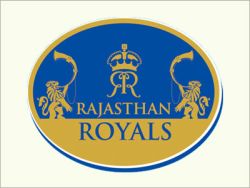 Kerala’s 18-year-old wicketkeeper Sanju Viswanath Samson has been representing his state team since his Ranji debut in 2011 against Vidarbha. The budding U-19 Asia Cup player hit two centuries in the Ranji Trophy last season and attended the Rajasthan Royals selection trials Jan 27, 28 and 29. The right-handed Samson was also recently appointed Kerala vice-captain for the Vijay Hazare Trophy.

Samson’s skipper Sachin Baby will also join Rajasthan Royals for the 2013 season. Baby has been a consistent performer for his state in the last few years and was among the top run-scorers in the invitational Buchi Babu Tournament and Vijay Hazare Trophy.

The 24-year-old left-handed batsman made his first class debut against Andhra Pradesh in 2009. Since then, Baby has appeared in 14 First Class and domestic matches, scoring 492 runs with a highest score of 104 at an average of 49.20.

Jharkhand bowler Rahul Shukla will add weight to the bowling attack of Royals. The 22-year-old right-arm medium pacer made his first class debut in 2009 against Tripura and played 11 matches for his state. Shukla played in IPL in 2010 and 2012 taking seven wickets at 15.71 from four games with an economy rate of 7.17.

Recruited a few months back, Mumbai’s young spinner Harmeet Singh has represented India in two Under-19 ICC World Cups in 2010 and 2012. In the 2012 edition, he was one of the main pillars of India, helping win the title with his economy rate of 3.02. The 20-year-old slow left-arm orthodox bowler led Mumbai at the U-16 and U-19 levels before making a magnificent First Class debut in 2009, when he grabbed a match-winning seven wickets against Himachal Pradesh.

Raghu Iyer, Rajasthan Royals, said, “We are thrilled to be giving four aspiring players an opportunity to play with us and are confident that their skills will be an asset to the squad.”

All the four youngsters will play under captain Rahul Dravid and experienced coach Paddy Upton.

“The IPL has been an excellent platform for encouraging the growth of fresh talent in our country. These four confident players will provide more depth and variation to our team during IPL 2013,” said Dravid.