Rekong Peo (Himachal Pradesh): Nearly 90 years after it came into existence, an inheritance law is all set to be challenged in the Himachal Pradesh High Court on the grounds of being unfair to women. 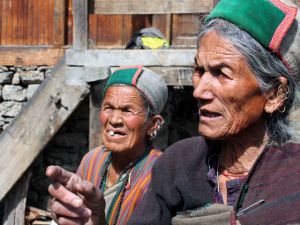 The law, Wajib Ul Urj, which came into existence only in the state’s tribal district of Kinnaur in 1926, permits only men to inherit ancestral property, if it is not bequeathed.

The patriarchal law bars even widows from inheriting their husband’s property, which is transferred to the sons.

“We are shortly going to knock on the doors of the high court to get justice,” 60-year-old social activist Rattan Manjari, chairperson of the Mahila Kalyan Parishad, a women’s rights group, said.

She told that in the past three years, campaigns on educating tribal women about their rights to ancestral property have failed to evoke any response.

The rights group in association of “mahila mandals” or women groups have also carried out a signature campaign in the district, demanding the amendment of local laws.

“We initially launched a drive to educate women about their rights to inherit ancestral property. Then a signature campaign was carried out. We got over 20,000 signatures, mainly from the women,” she said.

A memorandum was sent to President Pranab Mukherjee Jan 26 to get rid of the social evil, Manjari, who is among those rare fortunate women in the district who inherited ancestral property, said.

A prominent apple grower from the picturesque Ribba village, some 250 km from state capital Shimla, her mother bequeathed to her the entire agricultural land and not to her brother.

“If Manjari can be an exception, why not others,” asked Subhash Mendhapurkar, director of Shimla-based NGO Social Uplift Through Rural Action (SUTRA).

He said there should be one law for all the citizens of the country. “The amended Hindu Succession Act of 1956, which grants equal rights to men and women, should also be applicable here and nullify the century-old patriarchal law.”

Social activists said the awareness campaigns got a lot of opposition from men. Obviously, they fear that change in customary laws would divide their property.

Another activist, Kanta Negi, said the condition of deserted women, widows and spinsters in the district is deplorable. “They have to literally depend on the mercy of other members of the family. If they have the right to inherit property, they can live with dignity,” she said.

The prevailing law is totally unnatural and unconstitutional, S.K. Garg Narwana, a senior advocate with the Punjab and Haryana High Court, said.

“As per Schedule I of the Hindu Succession Act, the wife is the first successor of husband’s property. The tribal women will get justice in the court of law,” he said.