Chennai: The DMK Tuesday quit the UPA and its government voicing dismay over India’s stand over Sri Lanka at the UNHRC, but Finance Minister P. Chidambaram said there was no threat to the government.

DMK chief M. Karunanidhi announced that his party could not accept New Delhi’s bid to bail out Sri Lanka which faces charges of committing human rights abuses on the Tamil community. 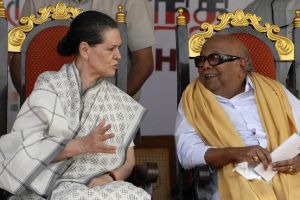 “Continuing in this government will be an injustice to the Sri Lankan Tamils,” the former Tamil Nadu chief minister told the media. The DMK has 18 members in the Lok Sabha and five ministers in Prime Minister Manmohan Singh’s council of ministers.

Karunanidhi said the UPA government had not only refused to consider the DMK’s views on the US-sponsored resolution against Sri Lanka at the UNHRC but had quietly watered it down.

He also ruled out extending outside legislative support to the UPA, in which the DMK was the largest constituent after the Congress.

The announcement made at the DMK headquarters was lustily cheered by a large number of party cadres who burst firecrackers and shouted slogans hailing Karunanidhi.

The US has introduced a resolution pulling up Sri Lanka over rights abuses and more at the 47-member United Nations Human Rights Council in Geneva.

But the DMK and the AIADMK want the Indian government to introduce amendments in the resolution accusing Sri Lanka of committing “genocide” on Tamils during the war against the Tamil Tigers.

If a resolution was introduced in Indian parliament accusing Sri Lanka of committing “genocide”, “we are ready to change our view”, the DMK leader said.

The DMK announcement, which sent the stock market crashing, came a day after a three-member Congress delegation called on Karunanidhi late Monday following his threat to quit the UPA.

In New Delhi, Chidambaram said the Congress-led UPA government was stable and continued to enjoy majority support in parliament despite the DMK’s departure.

Speaking later, Chidambaram tried to placate Karunanidhi by saying the Congress had noted his views and that he was a senior leader who “deserves all respect”.