Srinagar: The March 13 suicide attack here, in which five CRPF troopers were killed, was carried out by two Pakistani LeT militants with support from terror commanders from across the border, a top police official said Tuesday. 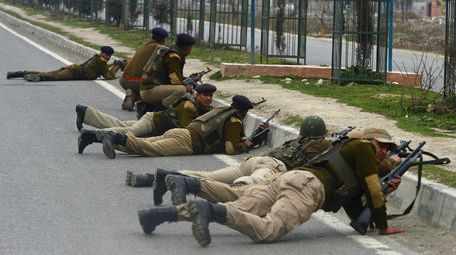 Abdul Ghani Mir, inspector general of police (IGP) Kashmir zone, told reporters that the probe into the March 13 attack has been completed and the case stands solved.

“Investigations have revealed that the attack was carried out by two Lashkar-e-Taiba (LeT) cadres identified as Saif, a resident of Dera Ghazi Khan (Pakistan), and Haider, resident of Multan (Pakistan), at the behest of their commander Ahmad Bhai and logistics chief Anas Bilal who are based across the Line of Control (LOC),” Abdul Ghani Mir said.

“During investigations, both Bashir Ahmad Mir and Muhammad Zubair were arrested by of the police,” he added.

The IGP said Muhammad Zubair had come to the valley in the first week of January while the other two guerrillas, Saif and Haider, had entered the valley from across the LoC in the middle of February this year.

The valley police chief said the arrested militants had revealed that the CRPF personnel in close proximity with youngsters playing cricket were purposefully chosen as a target since that would enable them to inflict maximum damages and cause civilian casualties.

Another person identified Pradeep Singh, a contractual sanitary inspector with the state government, has also been arrested for providing logistic support to the attacking guerrillas, the IGP said.

The police officer said while two AK-47 rifles with five magazines, two pistols, one under-barrel grenade launcher (UBGL) and four rifle grenades were recovered from the two slain guerrillas, subsequently more arms and ammunitions were recovered based on the disclosures made by the arrested persons.

The fidayeen attack took place in Srinagar after a gap of three years.