United Nations: The United Nations Children’s Fund (UNICEF) has said that almost 90 percent of death of children from diarrhoeal diseases are directly linked to contaminated water, lack of sanitation, or inadequate hygiene.

Globally, an estimated 2,000 children under the age of five die every day from diarrhoeal diseases and of these some 1,800 deaths are linked to water, sanitation and hygiene, the UN agency said as the international community marked World Water Day, which falls Friday this year, reported Xinhua. 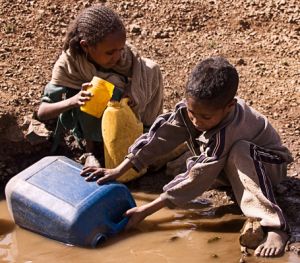 “Sometimes we focus so much on the big numbers, that we fail to see the human tragedies that underlie each statistic,” says Sanjay Wijesekera, global head of UNICEF’s water, sanitation and hygiene program, Thursday.

“If 90 school buses filled with kindergartners were to crash every day, with no survivors, the world would take notice,” Wijesekera said. “But this is precisely what happens every single day because of poor water, sanitation and hygiene.”

World Water Day has been observed March 22 since 1993 when the United Nations General Assembly declared the date as World Day for Water.

Almost 90 percent of child deaths from diarrhoeal diseases are directly linked to contaminated water, lack of sanitation, or inadequate hygiene.

Despite a burgeoning global population, these deaths have come down significantly over the last decade, from 1.2 million per year in 2000 to about 760,000 a year in 2011.

Improvements in water and sanitation would greatly contribute to a reduction in child mortality in these counties, UNICEF said.

Progress made since 1990 shows that with the political will, with investment, with a focus on equity and on reaching the hardest to reach, every child should be able to get access to improved drinking water and sanitation, perhaps within a generation, said Wijesekera.