New Delhi: The government was “ready for any discussion” on the VVIP chopper deal in parliament, Prime Minister Manmohan Singh said Monday. 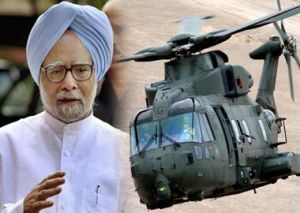 “Parliament is the appropriate forum to discuss all issues raised by the opposition. We are ready for any discussion,” the prime minister told reporters at an event here when asked about the opposition threat to disrupt parliament over the VVIP chopper deal.

“We have nothing to hide,” he added.

The Bharatiya Janata Party (BJP) has compared the $750 million scandal to the Bofors gun scam and said they would raise the matter in parliament, during the budget session beginning Feb 21.

The opposition has also demanded that the matter be fully probed by either a special team or under the monitoring of the Supreme Court.

A controversy has risen following alleged corruption in the February 2010 deal to acquire 12 AW101 helicopters from Finmeccanica’s subsidiary AgustaWestland for the Indian Air Force’s elite Communication Squadron, which ferries the president, prime minister and other VVIPs.

The defence ministry Friday initiated action for cancellation of the contract. It also issued a formal show-cause notice to the Britain-based subsidiary of Finmeccanica to explain within a week why the contract should not be cancelled.