Delhi: Headed for a grueling six day of hard rallying out in the Desert Storm, 138 teams in specially prepared vehicles got off to a start with the flagging off ceremony here today.

After logging about 2200 kilometers and negotiating some of the harshest dune landscapes in the country, including the competitive ‘Super Special Stage with Xtreme Sand Dunes’ between Bikaner and Jaisalmer, the rally concludes on February 23 at Jaipur.

In all 263 rallyists are participating in the Desert Storm 2013, the highest number ever in the 11 edition of the event. 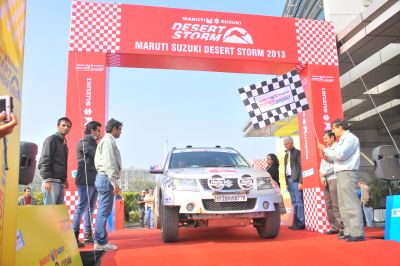 Winner of 2012 Desert Storm, ace rallyist Suresh Rana, the Xtreme racer from Manali in Himachal Pradesh was up for the head start at the flag-off ceremony. Rana, an 8 time winner of Raid de Himalaya, has entered the event with a Grand Vitara.

Raj Singh Rathore, the country’s first competitive quad rider, has entered the fray in the Quad category and would be riding a Polaris RZR 800.