The deep sea waters of South China Sea – West Philippine Sea are sensing real trouble in times to come. With Philippines challenging China’s claims over most of the territory at the UN tribunal, a scenario of uncertainty prevails South East Asian region as claims and counter claims are generating heat in international relations.

While Philippines contests the legitimacy of the maritime claims of Beijing, China reiterates its indisputable sovereignty over region. 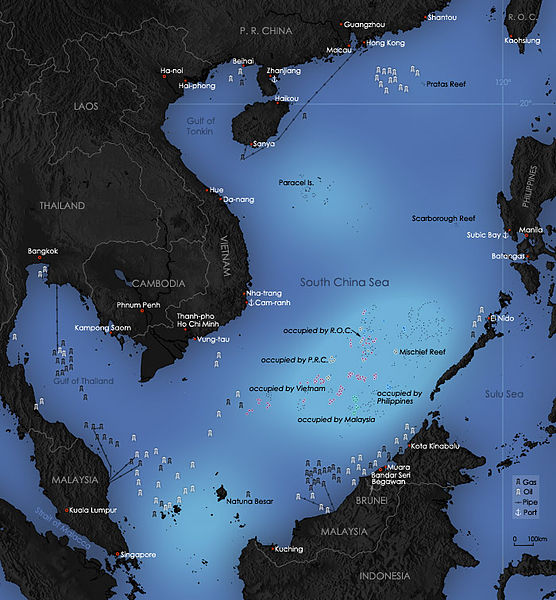 Philippines is laying emphasis on a treaty signed by the two countries in 1982–the United Nations Convention on the Law of the Sea (UNCLOS) whereby it is agreed that both countries would not impinge on the dominion and rights of each other in the sea region.

The South China Sea – West Philippine Sea possibly possesses huge reserves of oil and gas, which makes it too apparent that nations ought to have huge interests in the region.

China has always been on the hunt for supplementary sources of energy reserves but Philippines and other South East Asian countries, too, are on a path of unvarying growth and themselves require additional energy resources.

Since 1949, China has been an active party to 23 territorial disputes with its South East Asian neighbors alone.

Philippines and China have been engaging in various platforms since 1995 but are unable to strike a chord still. However, the real crisis began in April 2012 when sea vessels from both nations faced standoff around Panatag (Scarborough) Shoal. The situation had a potential to escalate into a greater issue of apprehension but was watered down somehow.

In the past years, China’s assertiveness in Asia has increased manifold and the developments could be witnessed around the Indian subcontinent as well. Recent examples include the Gwadara and Port of Qasim in Pakistan, the Hambantota Port in Sri Lanka, and the Sitwe (Akyab) Port in Burma. Moreover, China’s altercation with Japan over the energy rich Senkaku (Diaoyu) islands is one of the volatile issues at present.

The incessant search for oil rich regions has affected China’s international relations with other countries including India. Evidently, energy hungry China is involved in disputes where the islands encompass vast stocks of hydrocarbons and present strategic importance in the region.

The recent GMR fiasco in Maldives was also considered a plot carefully masterminded by the Chinese.

Political pundits are also questioning the role of the United States as a moderator in the whole matter. A number of political experts contradicts any possibility of US mediation sensing Chinese dragon’s steady economic ascend when America is still battling the recession of the late 2000’s. China recently became the most traded nation in the world trouncing US. America, too, shares an interest in upholding cordial relations with the surging power.

Interestingly, most of the nations, including America’s staunch supporter Philippines, have huge trade deficits with China. Therefore, the complainant is technically not in a position to question China’s over-aggressive position.

According to the Philippine Review, there are many other nations (Taiwan, Brunei, Malaysia and Vietnam) aside from Philippines that have claims over disputed waters. Therefore, it would be astoundingly difficult for the tribunal to decide on the matter in the interest of a single nation.

As widely speculated, the reason behind Philippines’ dragging of China to the international tribunal could be to justify its claims on the global arena and raise questions on the validity of China’s territorial claims for endless years to come.

In the past, a bilateral engagement with China over the issue only resulted in the termination of the agenda under heavy Chinese pressure. The ASEAN Regional Block was not of much help either. Thus, an international court raises hope of a legitimate settlement under international pressure or could at least validate Philippines’ claims.

This could also be a shrewd diplomatic stroke from the Philippines. Until matters are decided, the Philippines preserves its autonomy in the region from Chinese aggressors with this gallant step.

Conversely, reconciliation of the whole issue only needs a bilateral engagement but Philippines’ action has set a paradigm for the rest of the world (especially small nations in South East Asia) to follow; that is, the sovereignty of every country should be respected at all costs.

*** With inputs from Marjorie Baynosa, Asst. Professor at University of Philippines, Diliman.