New Delhi: Tension along the Line of Control (LoC) had reduced but India could not relax its vigil until it was convinced that Pakistan’s promises were “actually translated into action”, Defence Minister A.K. Antony said Friday. 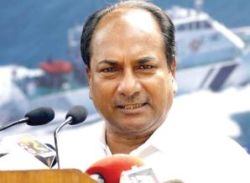 Following the series of talks at the level of the Directors General of Military Operations (DGMO), tension along the LoC, which divides Jammu and Kashmir between India and Pakistan, was much reduced, Antony said.

“But we cannot relax and have to be on vigil 24X7 because lots of promises were made promises are not enough. We want to see that these are promises being translated into action,” the minister told reporters on the sidelines of a function here.

“So we have to wait and watch and should take all measures unless we are convinced that these promises are actually translated into action,” he said.

Tension between India and Pakistan escalated following the brutal killing of two Indian troops by Pakistani troops near the LoC Jan 8. One Indian soldier was beheaded and the head carried away by the raiders.