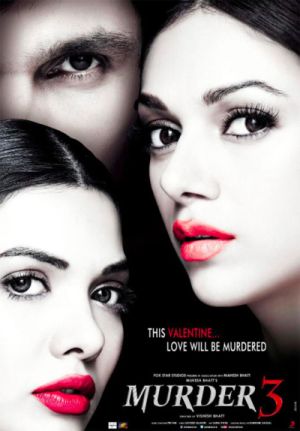 Being ingloriously famous for recreation of the Hollywood themes, Bhatts for a change have taken to something new with Murder 3.

Nothing atypical but we have a remake of “Spanish” classic “The Hidden Face” (La cara oculta) this time.

However, the movie can be termed as the best adapted version by the camp so far.

The movie can easily be mistaken as a horror-flick through the first half but shapes out an intensely crafted thriller later.

Murder 3, a sequel to the Murder 2 is directed by Vishesh Bhatt (making incursion into direction first time).

It is a watchfully tailored story of a wildlife photographer Vikram (Randeep Hooda) who moves from South Africa to India for his photo-shoot assignment along with his girlfriend, Roshini (Aditi Rao). She hurls up her flourishing career to settle in Mumbai, quite astonishingly.

They move into a pretentious house on the outskirts of Mumbai. All goes well until one day when Roshini decides to test Vikram on suspicion of his alleged involvement with his hair stylist Niyomi; the least we talk about Hooda’s jarring hairdo in the movie the better.

Unfotunately, this leads to sudden disappearance (on 14th February) of Roshini and here commences the real story.

As the plot unfolds, Vikram finds consolation in a gorgeous and sensuous lounge waitress Nisha (Sara Loren) who loves to flaunt her well-toned body uninhibited.

The house suddenly seems to hold many secrets with spooky noises arising from its different corners.

Nisha manages to reveal the secrets, though at some cost.

It was widely anticipated that Murder 3 would surely miss the charisma of regular “Murderer”—sorry!! Male protagonist of the past Murder flicks, Emran Hashmi. Nevertheless, Hooda leaves no stone unturned in matching up with his tiresome and dead pan faced acting skills.

Bhatt camp’s penchant for Pakistani actresses seems to be an unending affair. With casting of Mona Lizza in the project they are all set to flout anti-Pakistan feelings in the country all by themselves.

Anyhow, Mona’s outer persona appears somewhat enhanced than her debut Bollywood movie Kajraare. She looks appealing in the movie; a few acting lessons would perhaps do more justice to her raw flair.

Aditi Rao Hydari is the lass to watch out for. She steals the show singlehandedly, especially in the second part with her superior acting skills and susceptible looks.

***The movie gets thumbs up from Hillpost and 3 stars on a scale of 5.