Fortunes are assisting Mahendra Singh Dhoni like never before. The captain of Indian cricket team managed to secure his captaincy yet again despite a long run of poor form in the past test series against Australia and England. Dhoni’s captaincy and position in the team was under lens for past few months.

The only Indian captain that has ever led India to world cup wins in both limited over formats of the game (T-20 and 50 overs) exercised his shrewd tactics off –field and played a real checkmate to come out victorious ultimately. 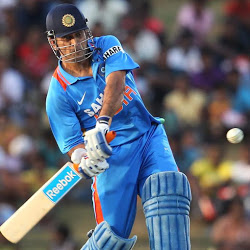 The 15 member squad for the first two tests against Australia was announced on 11th February 2013 and the biggest astonishment came in the form of Gautam Gambhir’s exclusion from the declared list. Gambhir was the leading substitute to Dhoni for captaincy position in the media circles for past few months.

Gambhir’s ouster could be attributed to his poor test form although others have not fared well either in their past performances. Gautam has averaged partly 34.33 in Tests in the last 15 test innings. The prolific opener has not scored a century in test matches since 2010.

Harbhajan Singh, a veteran of 99 test matches and a well-known confidante of Dhoni has been awarded one more chance despite poor domestic run.

Sreesanth deserved a chance to pair-up with Ishant Sharma considering his pace and reasonable experience against Aussies but Dhoni’s distaste towards Kerala speedster is well-known.

Inclusion of Bhubaneshwar Kumar would not help much on the dead pitches of India; making an allowance for his slow pace and over-reliability on swing. Indian pitches do not offer much post morning session to the swing bowlers. Therefore, he could be easy silage for the visitors if selected in the final playing 11.However, the Indian captain thinks otherwise.

The major revelation was the selection of Murli Vijay, a Chennai Super King teammate of Dhoni ahead of in-form Wasim Jaffer. Vijay had an average Ranji season though performed comparatively better in the Irani Cup but Jaffer scored 835 runs at 75.90 in continuance with his brilliant performances in the past seasons. Despite performing without fail, the veteran Mumbai Opener is overlooked for no fault of his. Nevertheless, his age (35) might rule against him but his rock solid defense and considerable experience as an opener could be more than valuable for any team looking for solidity at top.

The other shocking inclusion was of Ravinder Jadeja, another trusted lieutenant of Dhoni. With his limited technique and test match experience many eyebrows have been raised in the cricketing quarters.

This gives a clear indication about the state of matters running within the selection committee. Most cricketing experts term it as a sheer sabotage of selection committee affairs by the all powerful duo of Dhoni and N.Srinivasan, the existing President of BCCI.

Former BCCI selector and national cricketer Mohinder Amarnath had recently accused Srinivasan of superseding the sacking decision of Indian captain for his poor performances in 2011-12 during his tenure. Amusingly, it was Amarnath who had to lose his job thereafter and the whole episode went unexplained till date.

Subsequently, Srinivasan appointed Dhoni as the Vice -President of India Cements, a company owned by him. Dhoni is already a captain of his IPL team, Chennai Super Kings.

It led to a sudden increase in commercial and brand value of the company and IPL team. This smacks collusion between the two on business front.

Former players are also not very contented with the surprise selection of players from Chennai Super Kings and Tamil Nadu (native state of BCCI President) over and over again.

Whatever the reasons maybe but a stage is all set for further plunge of the Indian cricket team in prolongation with the poor test form of the past.