Loads of brilliance, astute mind and thick skin are the three important ingredients to build-up a successful person. Interestingly, thick skin is a mandatory prerequisite in the present world where every second person is a critic.

Arindam Chaudhri, the prized owner of IIPM definitely boasts of the first two attributes but his skin doesn’t seem to be thick enough. 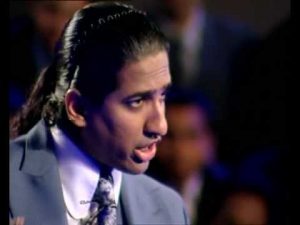 Abiding by the directive of the Gwalior court on the basis of appeal by Arindam Chaudhri, Department of Telecommunication (DoT) instructed Internet Service Providers (ISPs) to block over 73 URLs that were critical on his educational establishment, IIPM.

Nonetheless, the whole episode points to some imperative questions.

Q1–What made the pony-tail sporting self-proclaimed marketing guru to go for such inequitable means in order to tackle condemnation?

Q2–Shouldn’t he be more resilient in digesting criticism as his own articles are no music to most ears in the country either?

It is an unlocked secret that all the privately owned management institutes excluding IIMs and other few are losing on enrollment count with each passing year. This is indisputably denting the revenue source for them including IIPM and anti-IIPM content on the internet would not help either.

It is highly astonishing that the man who brags possessing a solution to just about anything could not find an uncomplicated way of replying to these News posts. He could have easily used his group’s mouthpieces such as The Sunday Indian to register his protest.

His own articles denounce Indian establishment on every single front of development (absurdly on most instances) and the latest on the Afzal Guru hanging be could easily disputed.

The blocking orders were even pushed on the Constitutional bodies without any bigotry whatsoever.

A public notice of July 2012 issued by the University Grants Commission “IIPM is not a university within the meaning of section 2(f) of the UGC Act; 1956” is not accessible on the net anymore.

Q3–Why is Arindam so insecure about UGC or AICTE’s perspective towards his establishment when they lack credibility in running the educational establishment according to him?

IIPM displayed such “Talibanic styled” intolerance even in the past when it filed a lawsuit of Rs 50 crore against The Caravan Magazine for its cover story against IIPM’s shady ways of functioning in February 2011 citing harassment charge.

It is a bare secret that IIPM gained in standing through full-page advertisements in the newspapers of same media groups who’s URLs have been blocked on his insistence.

His notorious move backfired entirely when the renowned hacking group Anonymous India brought down institutes’ websites for 9 hours after the blocking incident and the social media world hammered his up till now unblemished image.

Even the government is answerable who doesn’t ever think obligatory to notify the site owner in-prior and seek his argument on the subject.

Additionally, being an owner of media group (Planman Media), support on creative liberty is all the more expected of him. A shrewd marketing intellect undoubtedly, Arindam should know that negative publicity is the best form of attaining positive hype in the world of today.

Arindam do learn to take criticism in the stride so that India realizes “The Great Indian Dream” of free speech in actuality!