Doordarshan quoted Home Secretary R.K. Singh, who confirmed that ‘Afzal Guru who was convicted of conspiracy in the December 13, 2001 attack on Parliament, which almost led to a war between India and Pakistan, has been executed inside Tihar Jail at around 8 am today.’ 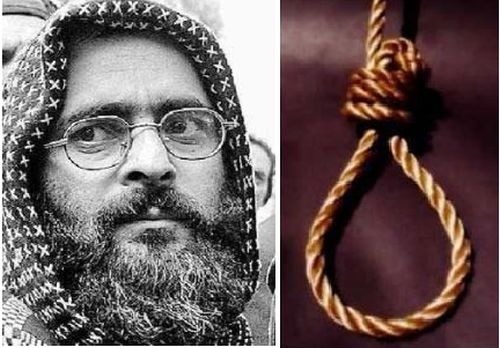 Rashtrapati Bhavan spokesperson Venu Rajamony confirmed that “mercy plea of the Jaish-e-Mohammad terrorist Afzal Guru (which had been pending since 2006) was rejected by President Pranab Mukherjee on January 23, paving the way for his hanging.”

Considering the repercussions Afzal Guru’s hanging could cause in the Valley State, curfew has been imposed around Tihar Jail and several areas of Kashmir.

Afzal Guru was convicted of conspiracy in attack on Parliament, wherein five heavily armed gunmen stormed the Parliament complex and open fired killing ten persons including a women CRPF official, five Delhi Police personnel, two security guards, a gardener and a journalist (who succumbed to his injuries in hospital). All five terrorists were shot dead.

A year later four accused including Afzal Guru were arrested for plotting the attack and were convicted. Guru was sentenced to death by the Supreme Court in 2004.

The demand for Afzal Guru’s execution from BJP and other parties and fronts had gained momentum after Ajmal Kasab was hanged in November last year.