If the tsunami of Dec 26, 2004, which killed nearly a quarter of a million people in 14 countries, has not touched your lives, then “The impossible’ will definitely do that and much more. You are bound to be swept off by the emotional quotient of the killer waves.

Urgent yet measured, like the onrushing tide, “The Impossible” is a real-life disaster film with scenes that would churn your stomach and wrench your heart. It is a true story, based on the experiences of a Spanish family. The film is deliberately one family’s perspective seen through the eyes of a British family of five holidaying at Khao Lak in Thailand.

There is something symbolic, when the pages of the novel Maria is reading on flight to Thailand for a Christmas break along with her husband and three sons, keeps falling off. This slipping of the page from the novel the second time at the beach resort at Khao Lak again occurs just moments before disaster strikes, probably signifying her story be told.

The day after Christmas, when the family is enjoying themselves at the resort, a massive tsunami hits the coast, destroying the beach and the neighbourhood. The family is separated. Maria and Lucas are swept far inland from the resort, but manage to stay together after fighting surging waters. Maria is injured by the uprooted trees and violent underwater debris. Maria, bleeding from her wounds, desperately needs medical attention. 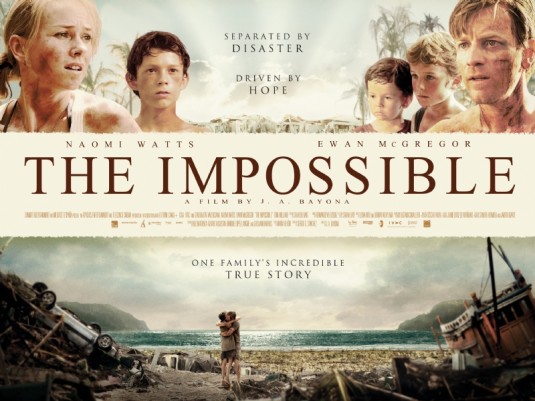 Unknown to the two of them, on the other end, Henry survives the tsunami along with his youngest two sons and struggles on through the muck and debris, looking for the rest of his family.

The film doesn’t build to the climax of the tsunami that ravaged, but essentially starts with it. In the long denouement that follows, one genre gives way to another, the disaster to a survival drama, and the suspense mounts over the looming question of who will survive this ordeal to tell the tale.

The performances of the cast in this film are gripping, passionate and defenseless. Naomi Watts as Maria is twice transformed, first into a wild woman protecting one of her cubs, then into a victim of massive injuries. Watts takes on the burden of her ordeal with masochistic conviction, wearing each bruise and gaping leg wound like a badge of honour.

Watts, and McGregor as Henry provide a haunting sense of panic and grief. But Holland as Lucas steals the show as the oldest son barely into adolescence, who comes of age in a matter of a few disaster-filled days. It is also heart-rending to see the youngest two, who desperately scream “Lucas Lucas” when they find their older brother. It just seems very natural.

Another strong point of the film is the outstanding work by the make-up department. Maria’s wounds and other injuries look very real. Less extreme, but just as convincing, are the fake injuries to Henry and Lucas made possible with make-up effects, including prosthetics and special contact lenses.

The powerful visual effects convincingly simulate a disaster of sweeping proportions, but the film sticks to the family at the center of the story and never lets go of the human element.

Director Juan Antonio Bayona manages to tell his story without it ever being gratuitous or resorting to sensationalism. Each frame is brutally honest with impressive cinematic spectacle, with scenes of destruction and primal desperate survival writ large.

However, while the concentration of the mud-and-tear-streaked faces is only on those of the leads’ and other white survivors, the Thai people are largely absent from their own tragedy here, visible only at the edges of the frame as helpful villagers or overtaxed nurses, thus not giving a holistic documentation of the tragedy.

Nevertheless, “The Impossible” looks back at a natural catastrophe with unwavering sincerity. It sees horror and pain, it sees courage and valour, but mainly it sees life with a myriad of emotions.