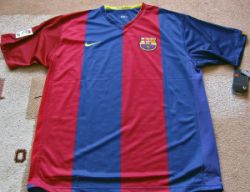 The team’s current ambassador to UEFA formally registered his great-grandson in the company of the vice president of FC Barcelona’s Social Area, Jordi Cardoner, having previously received the gifts traditionally bestowed by the club on its newborn members.

“The day (Pique) was registered 25 years ago I promised I’d make his son a member. I thought he should continue the tradition and, therefore, that his son should have the same honour and be a (member) from the very beginning,” Bernabeu said.

The soccer club has arguably been the world’s best thus far this century, having won three of the past seven UEFA Champions League crowns. It also is the favorite to win this season’s title.