Tbilisi  (IANS/RIA Novosti) More than one million Georgians, about one quarter of the country’s population, have signed a demand for President Mikheil Saakashvili to resign. 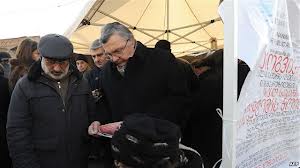 Under the constitution which sets the presidential term at five years, Saakashvili’s presidency is due to expire Jan 20, 2013, five years after his inauguration.

However, the country’s next presidential elections are slated for October 2013.

“Under the constitution of Georgia, you, President Mikheil Saakashvili, lose your presidential powers starting from January 21, 2013, which is fully in line with the Georgian people’s will and is confirmed by Constitution of Georgia and signatures of the majority,” the petition reads.

About 50 non-governmental and political organisations have joined the petition, which says “radical measures” will be taken if the president refuses to step down.

Rallies in support of the document have already been held in several Georgian cities.

Saakashvili’s supporters responded by organising their own public campaign in support of the president.