Srinagar (IANS) After a relief for a day, cold wave conditions again gripped the Kashmir Valley Thursday as temperatures dropped much below the freezing point, the Met Office said. 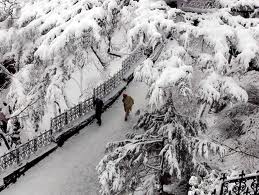 The minimum temperatures rose by a few notches across Jammu and Kashmir Wednesday as the Kashmir Valley experienced light snowfall and cloudy weather.

“Cold wave conditions will continue till the evening of Jan 12 and the night temperatures can drop further, adding to the intense cold prevailing in the state at present,” the official said.

Kashmir is at present passing through the 40-day period of harsh winter known locally as ‘Chillai Kalan’, that started Dec 21, 2012.

Although cold wave has continued during the first 20 days of ‘Chillai Kalan’, its intensity this year here is far less than what was last year.

During the corresponding period last year, the Dal Lake here had frozen rock solid while this year it has partially frozen.

So far, the valley has experienced no heavy snowfall.

The perennial water reservoirs that feed various rivers, streams and springs during the summer months are replenished by the winter snows.

Snowfall is thus something eagerly awaited for by farmers for the better prospects of kharif crops in the state.