Panaji: When the Goa assembly convenes todayy, the reams of cyclostyled paper with questions and answers and other text, a common sight in every state legislature, will hardly be seen. High definition (HD) screens will take their place, functioning in the manner of a TV prompter.

In fact, Governor B.V. Wanchoo will read his session-opening address off an HD screen.

The first such exercise in a state assembly in India has been made possible by the technological innovations that have been put in place by Speaker Rajendra Arlekar.

“Our effort is to make the assembly functioning completely paperless. This (the HD screens) is the first step,” said a senior official of the state legislative assembly who gave IANS a sneak peek of the arrangements.

“The screens will show the question which is being asked at the moment, so instead of looking at the paper in the hand all that the legislator has to do is to look at the screen. The same is the case with the minister who is answering the query too,” the official said.

During the five-day session, the HD screens and other refinements that have been put in place at a cost of Rs.2 crore will be used during the question hour, when calling attention notices are put, or when any text needs to be presented.

In the next exercise, to be undertaken by the end of the budget session in mid- to late March, all legislators will be issued with iPods that will give them Wi-Fi connectivity to the HD screens. The iPods will be acquired at a cost of Rs.50 lakh. 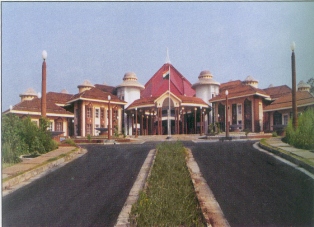 So how will the records of the assembly’s proceedings be maintained? Through transcripts that will be uploaded on the assembly’s website the next morning.

The five-day session promises fireworks with the nine Congress legislators having raised nearly 800 queries that the treasury benches will have to answer.

The seeds of the paperless idea was sown by former Speaker Pratapsing Rane, who is now the leader of the opposition.

“The papers become so voluminous. So many papers which get printed or cyclostyled are not used. It is a waste. Therefore, we had initiated the process of going paperless a few years ago. It’s finally happening now,” Rane said.

The Goa assembly formerly functioned from the summer residence of the Adil Shah of Bijapur on the banks of the beautiful Mandovi river.

In the cramped assembly hall, the media gallery was positioned in such a way that a journalist could almost tap a legislator on his shoulder and pass on a chit to him. The shift to the present expansive and sprawling premises happened at the turn of the millennium.

The current upgrade is of such cutting-edge technology that instead of regular speakers, the proceedings can now be relayed over surround sound speakers.

“All the wiring, laying of cables, is done. The five-day session will give us a better understanding of how the attempt to go paperless actually functions. If there are errors we can make the adjustments in time for the budget session,” the official said.

A paperless assembly could just be the trigger required for Goa’s 40 legislators to use the iPads which they are likely to get soon courtesy the Indian Institute of Technology (IIT)-educated Chief Minister Manohar Parrikar.

IPads, he says, will save on printing costs.

“We use more paper than the permissions given by the forest department to cut trees. One hundred and fifty copies of all questions is a lot of paper,” Parrikar stated.