Panaji: Buying fish for the rice plate has got dearer for Goans with prices escalating sharply due a strike by trawler owners. 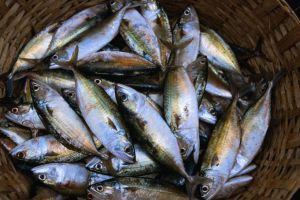 Fishing trawler owners from Goa, Maharashtra and Karnataka struck work Friday after the central government classified fishing as an industrial rather than an agricultural activity.

The new classification means that trawler owners will now have to shell out Rs.61.35 to buy a litre of diesel — an increase of a whopping Rs.11 per litre from the earlier subsidised price.

Two days into the strike, fish prices have doubled in the state, according to Anton Barretto, a fish seller.

Barretto said that one should not be surprised if the prices triple or even quadruple over the next two days. “There is no fresh fish coming in because the striking trawlers will not be going into the sea.”

The kingfish in Barretto’s basket costs Rs.500 per kg. The same fish Sunday sold at Rs.250 a kg.

It isn’t just the kingfish prices which have hit the ceiling. The prices of prawns as well as creek fish like the white snapper or the humble sole fish have also doubled.

John Fernandes, a trawler owner who operates a fleet of three trawlers from the Cutbona jetty, said the strike was “necessary” as the diesel price hike would make trawling expeditions more expensive and add to the rising inflation.

“I increased the wages of my sailors just two months ago and now this price increase. Sending trawlers into the sea may not be feasible for us,” he said.

Menino Afonso, who heads one of the fishing co-operatives, says the strike in Goa is near total with no trawlers from the three major jetties at Cutbona, Betim and Chapora leaving the piers.

“Our representatives will meet Agriculture Minister Sharad Pawar on Monday. Only then will we decide whether to continue our strike or not,” Menino said.

Fish prices in Goa are already high owing to the decreasing fish haul. Marine scientists have predicted a potential fish famine scenario in the near future if Goa does not control its tourism-propelled fishing activity.