Shimla: To open up another window for admissions to professional courses in a year,   Punjab Technical University has permitted direct admission to second semester in the BTech and MBA courses, a move that is bound to benefit much of the student community in the region, owner of a professional institution disclosed here.

Welcoming the technical universities move, Anshu Kataria, Chairman of Aryan Group of Colleges said, “hundreds of students from Jammu and Kashmir have already benefited from the new notification issued by PTU for the J & K board declares its result in December – January period.” 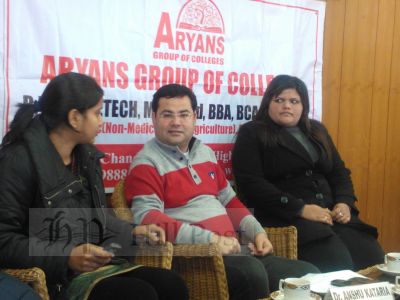 With about 25,000 seats lying vacant in the 110 engineering and other professional colleges of Punjab, the first movers’ advantage by PTU would benefit colleges affiliated to the university, he added.

Overseas students has the option of starting a course during the spring, summer or fall sessions; but such a scenario was yet to develop in the country, said Kataria.

The university had allowed colleges to fill up only the sanctioned strength of seats that had been lying vacant during the first semester. The last date for admissions has been put at January 22.

This was only done after a university committee established that there was no overlapping of the course in the first and second semester. Students who take admission into the second semester would have to complete the first semester during the summer vacations of the following two years.

As such a facility was not available for students from hilly states, students from Himachal who were not able to secure admission to the first semester have a distinct advantage of getting admitted to the second semester directly and it the process save an years time.

He said that the approved fee at Aryan College was Rs 40,000 and for deserving and meritorious students a scholarship upto Rs 1 lakh was available. For any scheduled caste or scheduled tribe student, there was no fee charged as the welfare department of the state concerned pays the fee for such students, said Kataria.

Established in 2007, the Aryan College is located on the Chandigarh – Patiala highway, near Chandigarh on a 20 acre campus. The group is running a management college, engineering college, education college, nursing college and a junior science college (+1  and +2 Non Medical)