New Delhi (IANS) India may have to “think of some other options” if Pakistan continues to violate the border ceasefire with impunity, said Air Chief Marshal N.A.K. Browne here today. 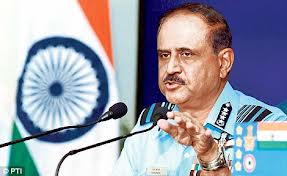 Addressing reporters on the sidelines of an event, Browne said the two countries have “mechanisms that are sacrosanct” — like the Line of Control and the 2003 ceasefire agreement — in place.

“And violations with impunity, what is happening…is totally unacceptable”.

“We are watching the situation carefully, if the violations continue, perhaps we may have to think of some other options for compliance.”

Asked what he meant by options, the air chief declined, saying “options are options…If violations continue we might have to look at the whole issue again.”

The air force chief’s comments comes a day after Pakistan summoned the Indian envoy in Islamabad to lodge its protest over the killing of a Pakistani soldier in alleged firing by Indian troops Thursday.

Border tensions between India and Pakistan have risen sharply since the Jan 6 death of a Pakistani soldier in alleged firing by Indian forces along the Line of Control in Jammu and Kashmir.

India had summoned the Pakistani High Commissioner Salman Bashir to lodge its protest over the killing. Political parties have called for tough action against Pakistan.