Jaipur: It is running serious trouble for the organizers of Jaipur Literature Festival 2013 as the city police has asked the organizers to stay back in the city till the investigation over the Ashis Nandy incident is over.

The festival producer Sanjoy Roy was informed in the respect by the by the police. While talking to media people city Additional Commissioner of Police Biju George Joseph said “the police have asked the organizers to stay back in the city till the probe is completed”.

On the other hand Sanjoy Roy established the development saying “I have signed the papers on the behalf of JLF team and would fully abide by with the orders of the police”.

He also added that the whole incident was blown out of context and Ashis Nandy is a very responsible person who is an active supporter of the SC/ST and OBC community for the past 50 years and politicalization of the whole issue is wrong.

Ashis Nandy had sparked a controversy on 26th Jan 2013 when he commented about  OBC, SC and ST being among the most corrupt in the country. After the controversy erupted, the controversial academic didn’t attend any of the pre-planned events for the following days.

In response Rajpal Meena, Chairperson of the SC/ST Rajasthan Manch lodged a FIR ((Serial no.35/2013) against Ashis Nandy and Sanjoy Roy in the Ashok Nagar police station of the city on the same day. 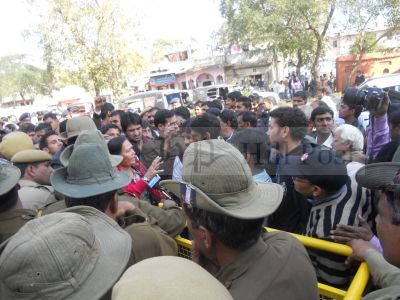 The SC/ST Rajastahan Manch also held an agitation outside the campus of the festival venue on 27th January 2013 and raised slogans against the Ashis Nandi and festival organizers.

While talking to the media, members of the Manch demanded strict action against the accused Ashis Nandi from Chief Minister Ashok Gehlot.

Last year the festival had courted controversy over inviting Salman Rushdie and this time the festival organizers have been asked to stay back by the city police till investigations over the Ashis Nandi incident is not over.

Though the festival has ended but what the future holds for Ashis Nandy and festival organizers, only time will tell.