Agra: Agra is fuming over Uttar Pradesh minister Mohammad Azam Khan’s statement that he would have led the mob that razed the Babri Masjid if it had chosen to bring down the Taj Mahal instead. 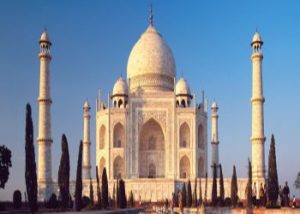 “He is mad and should be put up in Agra’s mental asylum,” fumed Surendra Sharma, president of the Braj Mandal Heritage Conservation Society, Tuesday.

“He doesn’t realise that the Taj is as much a religious and spiritual monument as the mosque in question was.

“If the minister thinks Agra residents would allow anyone to touch or damage the pride of India, all I can say is that it is foolish and short-sighted of him,” said Sharma.

The 17th century Taj Mahal is annually visited by more than eight million people and is a star revenue generator for the hospitality industry and the Agra Development Authority.

K.C. Jain, president of REDCO (Real Estate Developers and Colonizers Organization), questioned the need for a minister giving such “foolish statements” at a time when the Uttar Pradesh government was holding an Agra Summit to attract foreign investment.

The Uttar Pradesh urban development minister Sunday said he would have led the frenzied crowds had they decided to bring down the Taj Mahal instead of the 16th century Babri mosque in Ayodhya in 1992.

“Had people decided to demolish the Taj Mahal instead of the Babri mosque, I would have led them,” Khan said in Muzaffarnagar, 510 km from Lucknow.

Mughal historian R. Nath told from Ajmer: “The Taj is a climax of 5,000 years of Indian excellence, a justifiable pride and a valuable legacy.

“I am terribly saddened by the minister’s statement, and would only consider it a reflection of his madness and stupidity,” he said.

Nath demanded an apology from the minister.

Rajiv Tiwari, vice president of the National Chamber of Industries and Commerce, Agra chapter, said: “I am shocked. Azam Khan should immediately clarify and express regret.”

Syed Iftikar Jafri, noted Urdu scholar and director of the Mirza Ghalib Academy, said: “It’s an over reaction from an over-confident politician… He wants to destroy history, much the same way the Babri Masjid criminals did.

“Taj Mahal is a highly respected religious monument, a spiritual centre, apart from its historical and architectural importance. Truly he has hurt the religious sentiments of the people,” Jafri said.

Added Rakesh Chauhan, president of the Agra Hotels and Restaurants Association: “We have given a memorandum to the district magistrate to … send a strong message to the chief minister to pull up Azam Khan.”